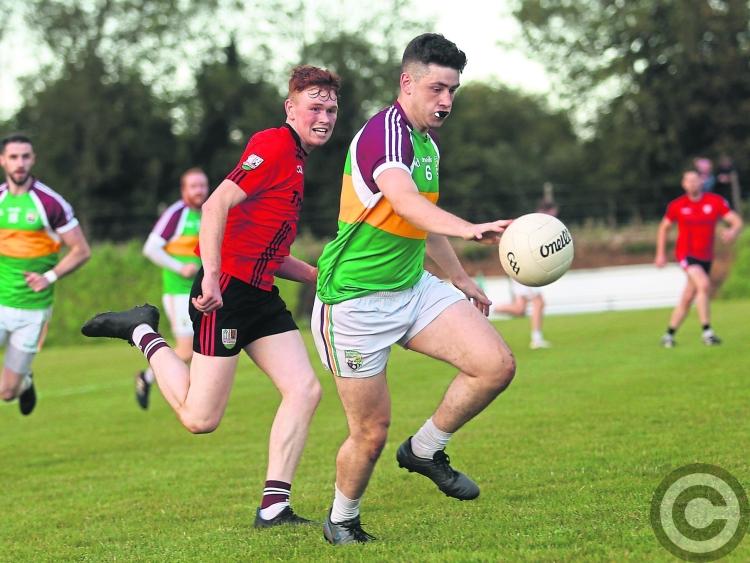 Conor Carroll on the ball for Ardagh Moydow ahead of Cashel opponent Conor Flood. Action from the recent IFC Group 2 clash at the Clonbonny grounds Picture: Syl Healy

One of the best games played in 2019, the year of living normally before the dreaded coronavirus pandemic struck, was the drawn Mulleady Group Intermediate football championship semi-final between Ballymahon and Ardagh Moydow and the teams will meet again in a last four rematch at Glennon Brothers Pearse Park this Saturday evening, throw-in 5.30pm.

St Brigid’s Killashee and Sean Connolly’s clash in the other Hennessy Cup semi-final at GAA headquarters on Sunday (3pm) and a couple of close encounters are in prospect to determine who will contest the Intermediate county final at the end of September.

A last gasp goal from Daryl Carrigy (currently out injured) in the second minute of stoppage time saved Ardagh Moydow as they snatched a fortunate draw (2-10 to 1-13) against Ballymahon in a dramatic finish amid a welter of excitement for both sets of supporters.

Ardagh Moydow looked in complete control after producing a very impressive performance in the first half to establish a commanding 1-10 to 1-3 lead at the break but Ballymahon staged a great recovery on the changeover.

Ten points in succession, six from their chief marksman Mark Connor (five frees), looked to have won the match for the men in red but Ardagh Moydow were thrown a lifeline with time almost up when the alert Carrigy pounced on the breaking ball in finding the back of the net.

Ballymahon came from five points down to win the replay (1-13 to 2-6) and will be hoping to go one better this year after suffering the bitter disappointment of defeat against Fr Manning Gaels in the 2019 title decider.

Mostrim clubman Gerry Lynn, who guided Mullinalaghta to the senior championship final back in 2014, is now in charge of Ballymahon who beat Kenagh and Ballymore to reach the penultimate stage of the championship with a game to spare.

Therefore, there was little at stake in their remaining group fixture against the also qualified St Brigid’s with the Killashee side coming out on top by four points.

Powerful Longford midfielder Kevin Diffley will take some stopping while back in action for Ballymahon this season is former county player Trevor Smullen whose vast experience could prove to be a vital factor in the quest for championship glory.

Talented attacker Killian Farrell is very much the main man on the Ardagh Moydow team, clearly reflected in the tremendous total of 2-7 he clocked up in the most emphatic 3-15 to 0-11 win over Cashel in the final round of the group stage.

Paddy Ganley is also a proven prolific forward, scoring 1-4 in that same game, but his side were hard pressed to get past Sean Connolly’s in the previous round with just two points separating the sides in the finish.

Former Longford star Niall Sheridan is the manager of Ardagh Moydow this year and he does not need to be told that Ballymahon will be hard beaten in what promises to be a tight contest.

Killashee will get it tough against Connolly’s

When St Brigid’s last won the Intermediate Championship title in 2016 their shrewd manager was Ray Curley and the Ballyleague native has returned this year for a second stint in charge of the Killashee side, bringing about a significant improvement.

Some regulars have returned to action, notably the Skelly brothers Willie and Emmet (an injury doubt) and the squad has been strengthened by the acquisition of a couple of new players in Chris Dineen and David Buckley, the Longford senior hurler.

While Killashee won all three games in the group stage of the championship against Ballymore, Kenagh and Ballymahon, there would appear to be little between the four teams left in the race for the Hennessy Cup and St Brigid’s are expected to get it tough against Sean Connolly’s and particularly so without the injured Darren Carberry.

Back in charge of the Ballinalee side for a second consecutive season is former Leitrim star Seamus Quinn with former Longford minor manager and senior selector Ciaran Fox also part of the management team.

Connolly’s were narrowly beaten by Ardagh Moydow but by virtue of their single point win over Cashel in their other group fixture a place in the semi-finals was secured.

Longford senior regular Dessie Reynolds is the driving force on the Connolly’s team and his penetrating runs have become a trademark. Watch out for his younger brother Daniel, a tricky corner-forward who has the ability to pose problems for the Killashee defence.

And with a fairly formidable midfield pairing in Stephen Lynch and Daire Duggan the Connolly’s team will be difficult to beat but St Brigid’s look to be the better balanced outfit and are given a hesitant vote to make it through to the Mulleady Group Intermediate final.