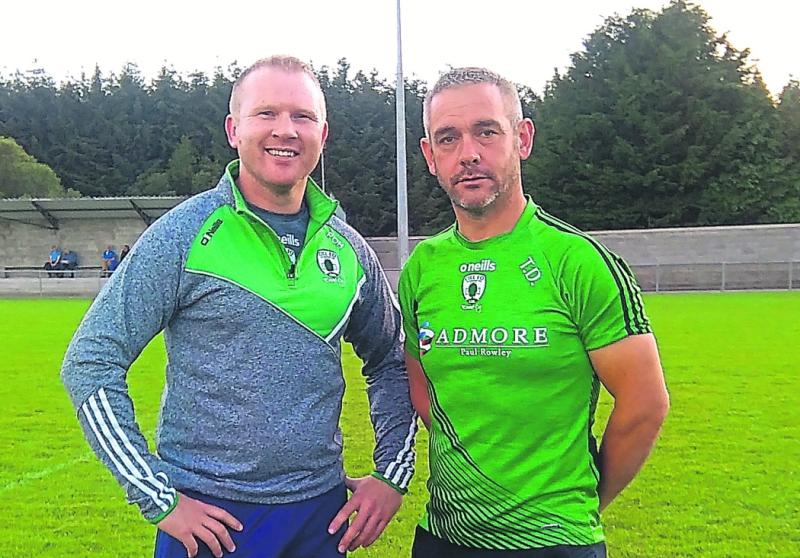 Killoe manager Thomas Donohoe (right) and selector Paul O'Hara pictured at the SFC first round game against Clonguish at the Monaduff grounds, Drumlish on Friday August 7 which was won by Emmet Og

The clubs who have qualified for the quarter-finals of the 2020 Senior Football Championship will have to wait a little while longer to find out their next opponents in the battle for the Connolly Cup.

A mediation hearing aimed at resolving the 48 week ban handed down to the Killoe Emmet Og club ended in stalemate on Friday night when it was hoped that those talks would broker a breakthrough in the suspension saga which rumbles on.

Thus Killoe’s remaining fixture in the SFC group stage against Mostrim this Sunday evening at Lynch Park has been postponed.

It was planned to make the draw for the Longford SFC quarter-finals after that game if the remaining Group 2 fixture had been given the green light to go ahead but that could not happen in any case due to another postponement last weekend.

Abbeylara were scheduled to meet Dromard in a make or break Group 4 clash at Allen Park on Saturday evening but the game was called off because of a bereavement, the sad death of Patrick Reilly with his son Reece a member of the Abbeylara senior football squad.

The game is refixed for the Newtownforbes venue this Friday night (throw-in 8pm) to determine who qualifies from the group to join St Mary’s Granard in the last eight.

The other two groups came to a conclusion last weekend and through to the quarter-finals are Longford Slashers, Fr Manning Gaels, Colmcille and Mullinalaghta St Columba’s.

Carrickedmond and Rathcline are out of the 2020 Senior Football Championship after losing to Slashers and Colmcille respectively.

The draw for the 2020 Mulleady Group Intermediate Football Championship semi-finals was made after the remaining Group 1 fixture between Ballymahon and St Brigid's Killashee at Moran Park today and is as follows: