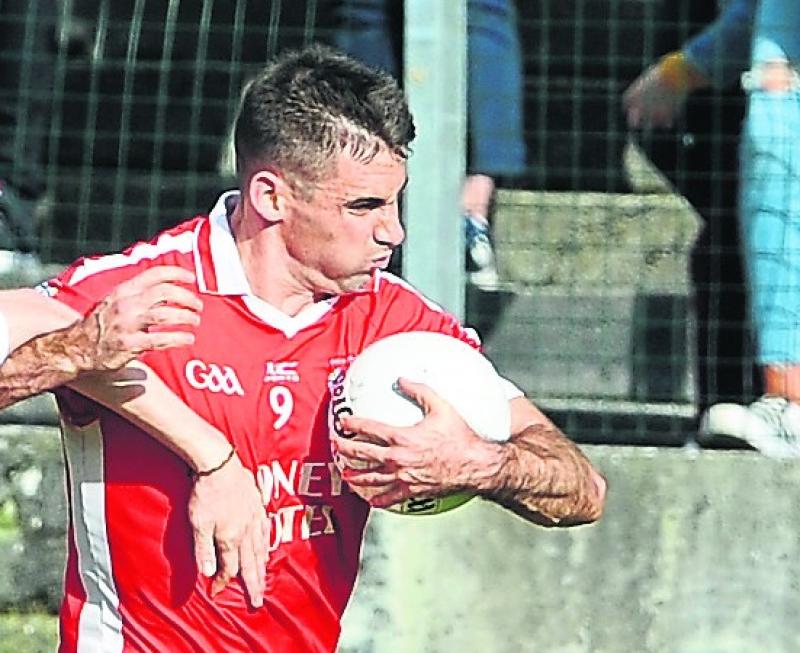 Ballymahon booked their place in the Intermediate Football Championship semi-finals with a comprehensive win over Ballymore on Sunday evening last.

The newly refurbished Andy Flood Park in Legan played host to this second round encounter and the perfect playing conditions suited the stronger Ballymahon side.

Ballymahon were in full control from start to finish despite missing a few starters from their impressive first round victory over Kenagh.

The introduction of veteran Trevor Smullen early on helped the men in red on the path to their expected victory. The former Longford footballer came on midway through the first half and registered the only goal of the game as Ballymahon put the game to bed before the break.

Ballymahon eased to a 5 point lead by the first water break with Mark McCormack setting the tone early on when he charged forward to kick a fine score. Further scores from Diffley (2), Fitzmaurice, Joe Nevin and Daniel Steele had Gerry Lynn’s side in cruise control.

Recent recruit from Ballynacarrigy Declan McGuinness along with Thomas Mulvihill, Nevin again and another from Fitzmaurice added to Ballymahon’s tally before Smullen’s looping effort for a point dropped under the crossbar to raise a green flag and give Ballymahon a 10 point lead at the break, 1-10 to 0-3.

Ballymore could not get going at all despite Damien Monaghan’s best efforts in the attack and they find themselves knocked out before the final round. Mattie McCrann did pull off a few fine saves to keep the scoreline respectable but the absence of powerful midfielder Bernard McElvaney was felt sorely along with some other regulars including the injured Glen Kelly.

Ballymahon kicked on after the break with the inside duo of McGuinness and Fitzmaurice providing the scores.

Ballymore tried their best but the game closed to a dull finish as Ballymahon brought on some more substitutes. There were two late red cards for Joe Nevin (Ballymahon) and Pete Walker (Ballymore) on second yellow cards.

Ballymahon will have to play St. Brigid’s for top spot in this group in an otherwise meaningless match while Ballymore and Kenagh are down to play in another dead rubber clash which makes no difference to either side as there is no relegation in this year’s Intermediate  Championship.