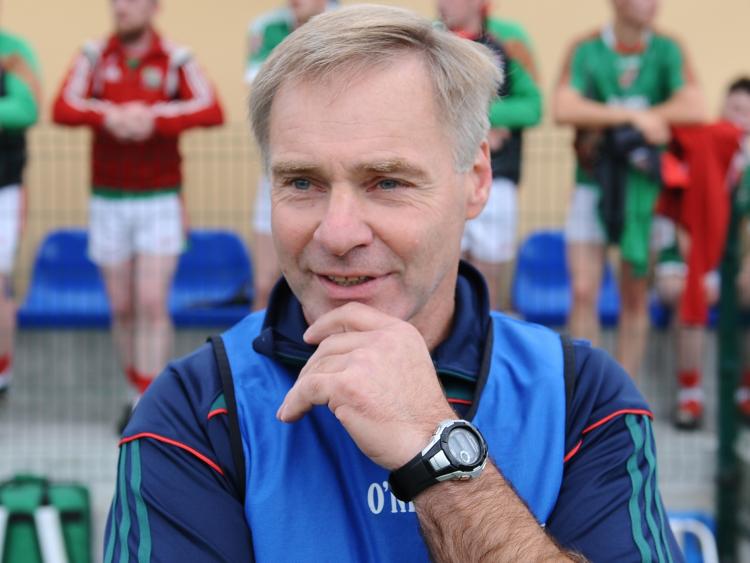 Eugene McCormack, the manager of the Colmcille senior football squad who play Mullinalaghta and Rathcline in the group stage of the 2020 championship Picture: Declan Gilmore

While Colmcille have failed to reach the senior football championship final since 2008 when they won the coveted county title, the future for the north Longford club would appear to be bright on the evidence of their shock win over Mullinalaghta last year.

All conquering St Columba’s came into the quarter-final on a real high as the reigning Longford and Leinster champions but they were brought crashing back down to earth in a sensational setback.

A goal from a penalty converted by their only county player, Barry McKeon, very late in the game clinched a famous victory for a highly charged Colmcille outfit under the driving force of their inspirational manager Eugene McCormack.

That proved beyond all doubt that the potential was there in Colmcille, showing the clear capability of competing with the best, and the boss McCormack (in his second season in charge) will be hoping to build on the significant progress that was made despite the subsequent defeat against Killoe in the 2019 semi-final.

“We worked really hard to manufacture that great win over Mullinalaghta with a generally young team but unfortunately we did not perform to the best of our ability against Killoe the next day.

“Maybe the pressure got to the players after taking down the might of the Leinster champions but we will hopefully have learned from missing a glorious opportunity of going all the way.

“When we knocked Mullinalaghta out, the championship was blown wide open. Killoe showed their experience to capitalise while Slashers came through the other side of the draw and were most unlucky to lose the county final by a solitary point,” commented McCormack.

Ironically, the draw for the 2020 Connolly Cup campaign has pitted Colmcille against next door neighbours Mullinalaghta yet again and they will clash in the first round of the group stage.

“It’s a very tough draw and Mullinalaghta, still hurting from the surprise defeat they suffered against Colmcille last year, will be really fired up to gain some revenge.

“In my opinion St Columba’s possess one of the best club forward lines in the entire country, obviously strengthened by the signing of former Cavan star Cian Mackey and the return of JJ Matthews from the United States.

“Getting out of the group is going to be difficult and we can take absolutely nothing for granted against a Rathcline team who feature around six current county senior players.

“Oran Kenny is a serious talent and one of the best young footballers to come through the underage ranks in recent years.

“We will need to be in the right frame of mind to make further progress in what appears to be a very competitive championship even if Mullinalaghta are regarded as the firm favourites.

Carrickedmond native Eugene is delighted that gaelic games are back in action despite the constant fear of the coronavirus pandemic.

The shortened season starts for Colmcille with a Division 1 league game against the county champions Killoe at Emmet Park this Saturday evening, throw-in 7pm.

“At one stage it looked like there would be no GAA activity this year due to the coronavirus outbreak so it is great to be back on the pitch despite the various restrictions.

“The lads will be rusty on their return to action but the couple of league games will give us a little platform for the start of the championship in early August,” concluded McCormack.