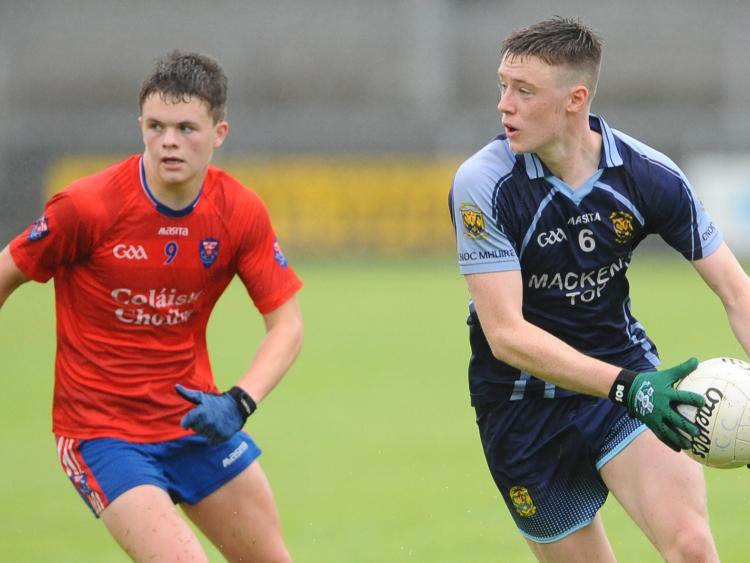 Ciaran Scanlon on the ball for Cnoc Mhuire, Granard in breaking away from Colaiste Choilm, Tullamore opponent John Furlong. Action from the Leinster Schools Senior 'B' Final Pic: Declan Gilmore

There was a return to some sort of normal in the wake of the coronavirus pandemic as the first competitive GAA fixture in four months pitted Cnoc Mhuire against Tullamore opponents Colaiste Choilm in the Leinster Post-Primary Schools Senior ‘B’ Football Championship final at TEG Cusack Park in Mullingar on Friday last.

Despite a determined late comeback, there was no title joy for the Granard school who were shattered by the concession of four costly goals at crucial stages of the game but it might have been a different story had they converted a penalty midway through the first half.

The sides were all square (0-3 to 1-0) approaching the water break when Micheal Hynes cut in from the right in his drive to score a goal and the referee blew the whistle for a penalty for what the official deemed to be a foul on the sharp corner-forward.

Up stepped Hynes to take the kick but he shot wide in what was a very lucky escape for the Tullamore side who ended up leading by four points at the break, 2-3 to 0-5.

Cnoc Mhuire keeper Daire Madden produced a great  save to keep out a point-blank effort from Sean Courtney in the early stages of the game but was eventually beaten with 12 minutes gone on the clock.

Madden blocked down a shot from impressive midfielder Luke Egan, who followed up to fire the rebound into the back of the net, and Cnoc Mhuire suffered a real sickening blow just before half-time.

A speculative dipping shot from wing back Cathal Ryan yielded a fortunate second goal for Colaiste Choilm while their three points in the first half all came from frees converted by Jack Byrant.

The other dangerous Cnoc Mhuire corner-forward Cormac Brady, who was always a threat, fired over a couple of points with Hynes also kicking a brace of scores.

Centre-half-back Ciaran Scanlon (free) accounted for the other point in the first half and the Granard school were facing a tough uphill battle against the wind on the changeover.

Things almost went from bad to worse in the early stages of the second half with wing back Bryan Masterson coming to the rescue in blocking a goalbound strike from Colaiste Choilm half-time substitute Michael Fox.

The pressure was mounting but Cnoc Mhuire showed a lot of character in battling back to close the gap to just a couple of points with a score apiece from Cormac Brady and Micheal Hynes (free) in quick succession.

Prior to his point in the 34th minute a goal attempt from Brady was well saved by the opposing keeper Anthony Lambe but just when it seemed as if the course of the game was  changing a killer third goal materialised for Colaiste Choilm in the 41st minute.

Luke Egan and Sean Courtney linked up to place Michael Fox in a perfect position to plant the ball in the net from close range and the lead was extended when Egan landed a terrific  long range point.

The powerful midfielder and his namesake, dynamic centre-half-forward Cormac Egan, tormented the Cnoc Mhuire defence throughout the game and there appeared to be no way back when Courtney scored a cracking fourth goal for the Tullamore team in the 51st minute.

Nine points behind and who were apparently dead and buried, Cnoc Mhuire were thrown a lifeline when wing back Mark Cunningham grabbed a well struck goal in the 55th minute after combining with substitute Emmet Brady.

And when a second goal materialised moments later after Cormac Brady scrambled the ball over the line, the great escape was on but Colaiste Choilm kept their composure to stay in front.

A free converted by Courtney with time almost up made absolutely certain of the Leinster title triumph for the talented Tullamore team who were unquestionably worthy winners in this milestone match as the GAA begin to bounce back from Covid-19.