Feelgood factor in Longford as gaelic games get back on track

First round fixtures in Division 1, 2, 3 and 4 in the league this weekend 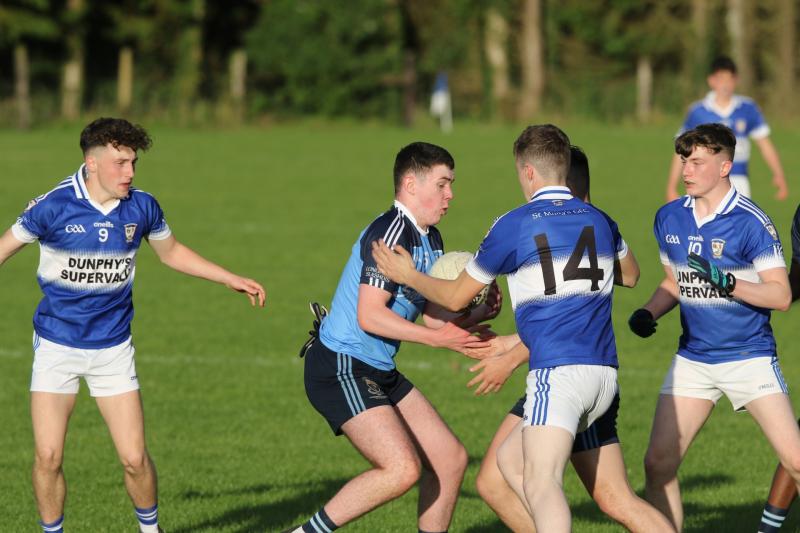 Action from the Minor Football Championship Round 1 game between Granard and Longford Slashers at Higginstown on Monday evening last. Slashers won 3-10 to 3-8 Picture: Matt Smyth

The dressing rooms remain closed and the attendance at games are currently capped at 200 until further notice in compliance with the Covid-19 guidelines for lifting of restrictions but there is a real feelgood factor with gaelic games back on track.

There was a return to some sort of normal amid the coronavirus pandemic as the first competitive GAA fixture in four months pitted Cnoc Mhuire Granard against Tullamore opponents Colaiste Choilm in the Leinster Post-Primary Schools Senior ‘B’ Football Championship final at TEG Cusack Park in Mullingar on Friday last.

Despite a determined late comeback, there was no joy for the Granard school who were shattered by the concession of four costly goals at crucial stages of the game and ended up losing by four points, 4-5 to 2-7.

The bulk of the Cnoc Mhuire team were back in action for their clubs, Granard and Northern Gaels (the long standing Abbeylara/Mullinaghta amalgamation at underage level), in the opening round of the Minor Football Championship on Monday evening last.

That was the official restart for Longford GAA clubs on the gradual road to recovery with the 2020 Kellogg’s Cul Camps also kicking off on Monday at the Clonguish, Killoe and Longford Slashers venues and which certainly generated a lot of excitement for the children.

The long wait is over and the return to league action this weekend for the senior, intermediate and junior teams has the GAA buzzing again.

First round games are down for decision in Division 1, 2, 3 and 4 of the All County Football League in the build up to the start of the championships in a couple of weeks time.

Between the training sessions and the staging of several challenge games, the players are showing a lot of enthusiasm despite the fears of a second surge of the dreaded virus as the country emerges from the lockdown stretching back to March

Interview with Colmcille manager Eugene McCormack in this week’s Leader and a look ahead to the opening league games as the senior, intermediate and junior football teams return to competitive action.