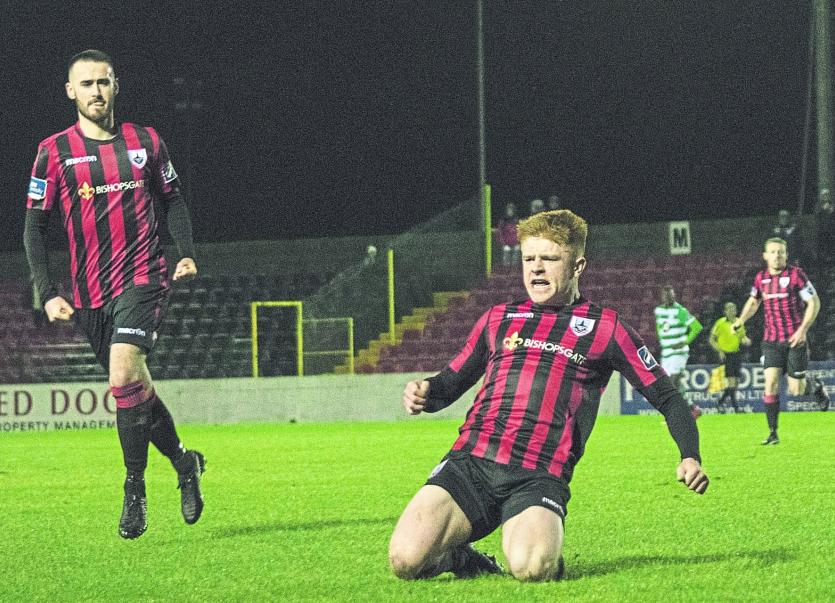 Aodh Dervin celebrating after scoring the first goal for Longford Town in the 2-0 win against Shamrock Rovers II in the opening round of the season at Bishopsgate on Saturday Feb 22 Pic: Ken Keenan

After enduring a few frustrating months out of action and not knowing what was going to happen in dealing with the coronavirus pandemic, sport is bouncing back and the latest boost is the return of the Airtricity League on Friday July 31.

Great news indeed for Longford Town FC manager Daire Doyle and his players with the preparations for the restart of the soccer season moving along at a steady pace.

A friendly against Shelbourne last weekend ended in a 2-1 defeat for Longford with Sam Verdon scoring the goal.

The National League Executive Committee has ruled that the SSE Airtricity League will resume from July 31 with two rounds of matches in total, including games played to date, and promotion and relegation as scheduled at the start of the 2020 season.

The  League will resume as planned with two rounds of fixtures, 18 in total, and counting results of matches played to date.

One club will be automatically promoted to the Premier Division from the First Division, the eventual champions, with one club automatically relegated from the top flight.

A play-off will take place between the ninth placed Premier Division club and the winner of the First Division play-off series involving the teams that finish 2nd, 3rd, 4th and 5th in the  second tier.

The winner of the play-off will participate  in the Premier Division of the SSE Airtricity League in the 2021 season.

The Board of the Football Association of Ireland approved the decision of the NLEC, made on the 30th of June, to resume the SSE Airtricity League and fixtures will be announced in due course.

Longford Town were last in action in the First Division as far back as Friday February 28 when they scored a terrific 1-0 win over fellow title contenders Drogheda at United Park.

As the GAA clubs around the county gradually get back to some sort of normal in the wake of the coronavirus pandemic that has not gone away, the focus is firmly fixed on the forthcoming senior, intermediate and junior football championships along with the battle for senior hurling glory.

Between the training sessions and the staging of several challenge games, the GAA players are showing a lot of enthusiasm despite the fears of a second surge of the dreaded virus in a world turned completely upside down.

First round games in the group stage of the senior and intermediate championship are scheduled for weekending Sunday August 9.

The 2020 Longford club season will start with games in Division 1 and 2 of the All County League, split into two groups, at the end of July in a gradual return to action.

In this week’s Leader Sport, Padraic O’Brien takes a look at the 2020 senior football championship which starts in August and talks to Killoe Emmet Og manager Thomas Donohoe as the preparations continue for a return to competitive club action