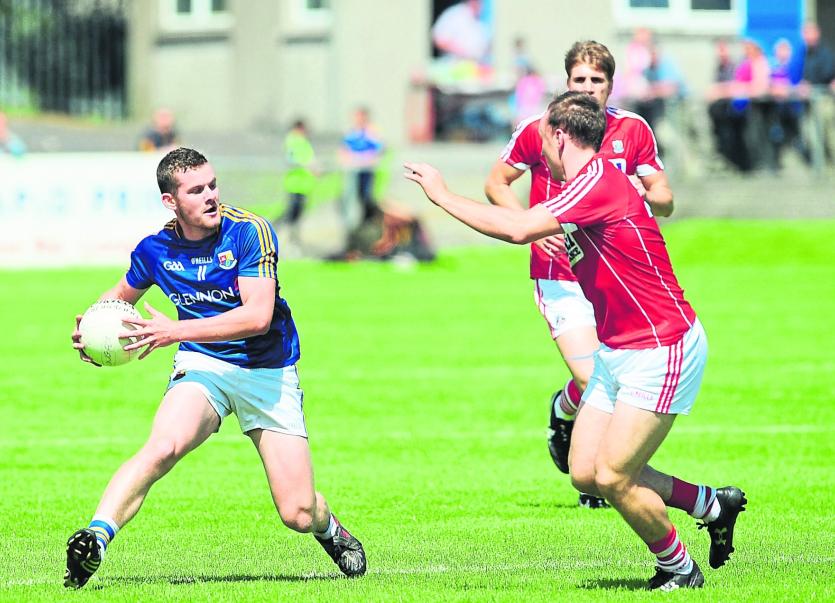 James McGivney pictured in action for Longford against Cork in the All-Ireland SFC Qualifiers Round 3B game at Glennon Brothers Pearse Park back in July 2016 Photo: Declan Gilmore

In a normal life Longford would be playing Cork in a crucial National Football League Division 3 last round clash at Glennon Brothers Pearse Park this Sunday but the coronavirus pandemic put a stop to that with the GAA world currently at a standstill.

Longford gave Cork a right scare in the last competitive fixture between the counties back in 2016 after scoring a sensational win over Monaghan in the previous round of the All-Ireland SFC qualifiers in Clones.

Another shock result was looking possible with ‘David’ Longford leading by 1-4 to 0-3 at the break against ‘Goliath’ Cork but the visitors scored a couple of goals in the second half to shatter Denis Connerton’s courageous charges.

The following is the report that appeared in the Leader:

While Longford were gradually cracked by a physically stronger Cork side in Round 3B of the All-Ireland Senior Football Championship Qualifiers in glorious sunshine at Glennon Brothers Pearse Park, shattered after conceding two second half goals, the ‘back door’ giantkillers really put it up to their illustrious opponents and another shock result looked possible when the rattled rebels ended up trailing by four points at the break.

Much to the sheer delight of the home supporters, who comprised the vast majority of the official 3,567 attendance, Denis Connerton’s courageous charges were leading by 1-4 to 0-3 going into the second half  with the goal coming from a penalty converted by Brian Kavanagh in the 26th minute after Robbie Smyth was fouled in the square and still managed to scramble the ball into the net.

While no advantage was played by referee Barry Cassidy it did not matter as Kavanagh made no mistake in hitting the target but Longford were generally the victims of some harsh decisions by the infuriating Derry official, particularly so on the changeover as Cork continued to pile on the pressure after producing a very poor first half performance when they appeared to be in considerable trouble.

Just like the magnificent display against Monaghan the previous week, Longford brought a high intensity into the match that Cork were struggling to match with the notable exception of their powerful midfielder Alan O’Connor who was outstanding throughout this rather scrappy championship clash that failed to reach any great heights.

Indeed, had the home side made better use of their scoring chances in the first half (shooting seven wides to Cork’s five) they could have been further ahead at the break. Robbie Smyth fired over a brace of points (play and free) while Diarmuid Masterson and the most impressive James McGivney also shot over the bar as Longford raised high hopes of making it through to the last 12 of the All-Ireland SFC for the first time since 2006.

But it all turned sour in the second half and the underdogs were left to rue a few more costly missed chances early on the resumption, the best of which fell to Liam Connerton who shot wide in the 38th minute when the better option was to offload the ball to Robbie Smyth when a goal was on.

Slowly but surely Cork got on top and the best Longford could manage thereafter was a point apiece from Brian Kavanagh and Michael Quinn as the dream of making further progress in the qualifiers disappeared.

Operating in Division 1 of the National League this season, Cork’s vast experience proved to be a crucial factor in the eventual outcome and the introduction of such quality forwards as Paddy Kelly and Colm O’Neill at the start of the second half played a major role in swinging the issue back in favour of the revitalised rebels.

Three points in a row through Mark Collins (2) and O’Neill (free) narrowed the gap to the minimum and from the moment the deadly O’Neill fired home a well-taken goal from a tight angle in the 49th minute to put Cork in front by 1-6 to 1-4, it was clear that Longford were now fighting a real uphill battle.

Prior to that turning point, the home keeper Paddy Collum made a point-blank save to prevent O’Neill from finding the back of the net and the Drumlish netminder done likewise in the opening minute of the match to keep out a shot from big Cork full-forward Peter Kelleher who otherwise made little impact against his direct opponent Barry Gilleran who done well to contain this threat.

At different stages of the game Dermot Brady, Michael Quinn, Darren Gallagher and Diarmuid Masterson were also to the fore but it was a step too far for the Division 3 side who got tired in the second half as the massive effort in beating Monaghan seven days earlier began to take its toll.

Michael Brady was forced to retire injured in the 45th minute due to a recurring back problem and when the other Longford midfielder Darren Gallagher was sent-off along with Cork centre-half-back James Loughrey following a brief fracas in the 54th minute the chances of another giantkilling act were fading fast.

A few minutes before that double dismissal, Paddy Kelly kicked a crucial point for Cork to extend their lead (1-7 to 1-4) and while Longford finally got their first score in the second half when Brian Kavanagh landed a fine point in the 55th minute, the killer blow was struck when Kelly showed tremendous vision to pick out the completely unmarked Ian Maguire with a perfect crossfield pass to create the second Cork goal in the 60th minute.

The big midfielder kept his composure to weave his way past Paddy Collum before finishing the ball to the net and there was no way back for Longford with Michael Quinn getting a consolation point in the 65th minute.

Paddy Kerrigan then converted a free for Cork and the tale of woe was complete for the home county who ended up with 13 players on the pitch after Diarmuid Masterson was sent-off for a second yellow card offence in the 69th minute.

It was a cruel finish for Longford, with another Cork substitute John O’Rourke getting his name on the scoresheet deep into stoppage time, but Denis Connerton and his players can look back with a lot of pride on a successful 2016 season after knocking two Division 1 teams (Down and Monaghan) out of the All-Ireland Championship.

Please God Longford will get the opportunity to play Cork again in 2020 as we deal with very difficult times in our lives. Stay safe everyone.