Longford U-20s facing a very tough task away to Dublin 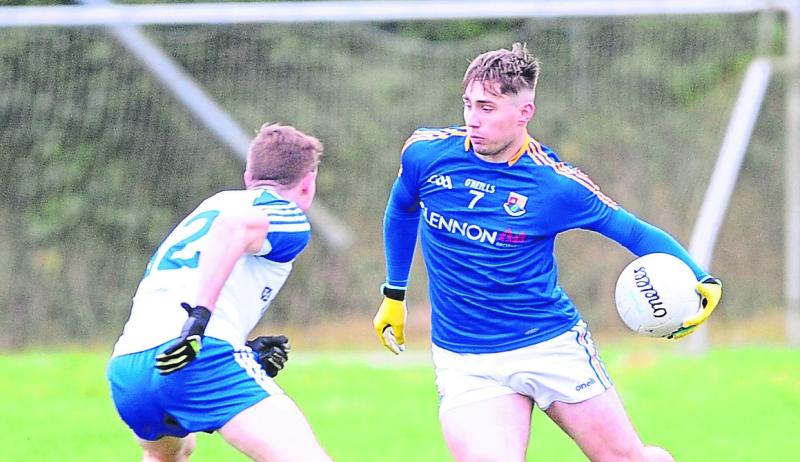 Eoghan McCormack pictured in action for the Longford U-20s against Monaghan in the recent Philly McGuinness Cup Final in Mohill Picture: Declan Gilmore

Longford U-20 manager Donal Ledwith is well aware of the very tough task that faces his side on Saturday when they travel to Parnell Park to take on reigning Leinster champions and beaten All-Ireland finalists Dublin in the Leinster U-20 quarter-final, throw-in 2pm.

Ledwith said: “We went to Aughrim to have a look at the match between Dublin and Wicklow. They are a formidable side. Dublin did their work against the wind. Shows the attacking threat they do have.”

Last year Ciaran Archer scored 3-8 against Longford and won the Eirgrid U-20 Player of the Year. The St. Maurs player is eligible again this year. Ledwith was full of praise for the forward.

“He is a talented player. U-20 player of the year last year and another year in this grade so he’s going to be stronger. They are a well balanced team too. They play similar to the senior team; that template of attacking, kick passing football. But at this time of the year you can bring everyone down to your level.”

Although Dublin will be hot favourites to progress to the semi-final Ledwith believes that at this age grade it is hard to predict how games will go.

“They are all the same age. Just because they’re from Dublin doesn’t mean they are anyway different from a 20 year old from Longford.”

Longford can look to senior regulars Joseph Hagan and Oran Kenny. The latter has really impressed so far in his first season of senior inter-county football.

They are without the injured Keelin McGann and Richard Prior but have players making a welcome return.

Ledwith said: “Cian Dooner (Killoe) is back training with us. Richard Prior is still out, he is a big loss to us. Dario Cigliano (Mostrim) was back last week. Once you come up to these big  matches injuries tend to clear up.”

Having a competition while mock exams are on doesn’t help smaller counties like Longford. Ledwith is baffled at how the GAA came up with the timing of this competition.

“It beggars belief. You don’t know what their thinking is. For me when the opportunity came up to take it I felt I was doing it for the right reasons, for the young lads. They are only young and need guidance.”

Ledwith stated that the preparations for this game have been going well. The Philly McGuinness Cup competition was a great help to his side although the Abbeylara man was disappointed with how the final against Monaghan went for his side.

“We didn’t have enough on the day of the final against Monaghan; we had injured players on top of the two players that were involved with the senior panel the next day.

“We got as much out of the competition as we could, bar winning the cup. That was a good competition but the main thing was the championship game on the 15th of February.”

The Longford boss praised the commitment players have shown since they were called into the panel. “They have trained well for me, all through Christmas and the Philly McGuinness Cup with our eyes on this date. They’ve really put in a huge effort.”

Boosted by a couple of crucial goals in the first half there was just no stopping the physically stronger Monaghan side who scored a comfortable win over Longford in the Under 20 Football Development League Philly McGuinness Cup Final at the Mohill GAA grounds at the end of January.

Minus senior players Joseph Hagan (Dromard) and Oran Kenny (Rathcline), along with the injured Keelan McGann (Kenagh) and Richard Prior (Rathcline), Longford trailed by 2-4 to 0-4 at the break and eventually lost by nine points.