Longford manager Padraic Davis delighted with the win over Louth 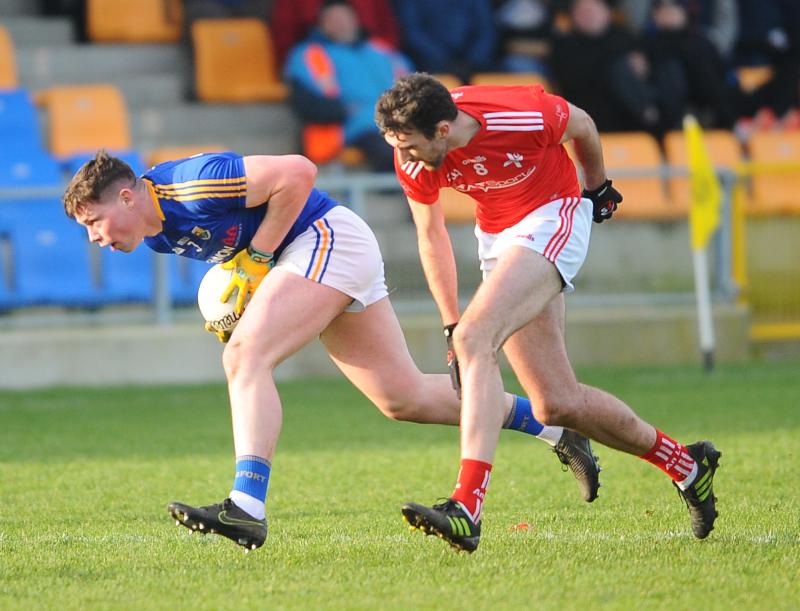 Andrew Farrell on the ball for Longford against Louth in the National League Division 3 game at Glennon Brothers Pearse Park on Sunday last Picture: Declan Gilmore

Longford manager Padraic Davis was delighted that his side not only picked up the two points in their opening Division 3 game against Louth but also the manner in which they secured the win.

Davis said: “Coming into the game, in the month of January, if you had asked me “if we get to 16 points would you be happy with that.” I’d be very happy with it. I suppose what it could’ve been.

“I think we are going to Offaly in a far better position mentally for the group. It’s one that we look forward to.

“The lads deserve credit for backing up their O’Byrne Cup performance by getting off to a start here with 2 points on the board.”

Longford were the better side throughout. What pleased their manager was their move from defence to attack.

“Our transition from defence to attack was at a different level than Louth’s. That was probably the only place that we really had them.

“We defended brilliantly in that second half. Overall the lads realise how big a task it was coming in today; coming off the back of the O’Byrne Cup win. It’s heads down again for this week and it’s a massive game in Offaly.”

Louth were a physical side but Longford played better football and their fitness told.

Davis said: “They are a very big side. It was very hard for Gally (Darren Gallagher), Kevin Diffley and Mickey Quinn to win primary position in the middle of the field but I thought we did exceptionally well on their kick-outs; particularly in the first half. We turned over five of them.”

In stoppage time Louth cut the gap to three points and were looking for a second goal. Longford got a crucial point through substitute Darragh Doherty.

“Darragh Doherty’s point was so important at the very end. Great game management by a young lad. He was very aware of the situation and he fisted the ball over the bar. Louth would’ve needed to score 1-1 to draw the game. It put us in a strong position  to win the game,” said Davis.

Next up for Longford is a trip to Tullamore to face Offaly. The Faithful County will be out to avenge the O’Byrne Cup Final defeat and lost their opening league game to Cork, despite leading early on.

Davis said: “Offaly are coming off the back of losing the O’Byrne Cup Final and despite a very good display in Cork, they didn’t get the points there. They’ll be looking at this being the game that would put them back on track. We need to be at our best again. It’s a big game for both of us. We are going to have some job to match the hunger that they have.”

Davis stated that Longford go to Tullamore full of confidence and hoping to build on the Louth win: “It has given us the confidence and belief coming off the back of the O’Byrne Cup. So far, so good. It’s a massive week for us. We travel to Tullamore and try to get two points.”