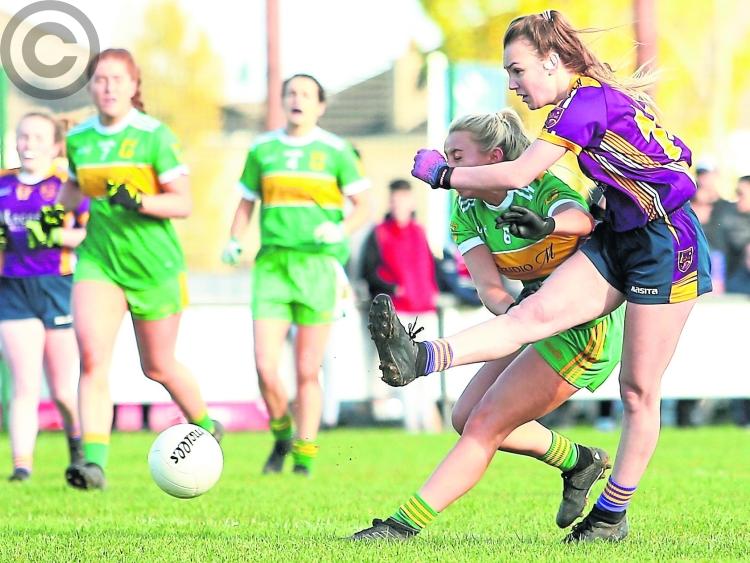 Kilcock came from five points down to claim a dramatic win over Grattans in the Leinster Ladies Football Junior Club Championship semi-final at the Kilcock GAA grounds on Saturday last.

Grattans held a four point lead at half-time. Kilcock made a great start to the second half to close the gap but Grattans came back and were five ahead by the 38th minute. Credit to the Kildare side they never gave up and a goal from Grace White in the 50th minute saw them go two points ahead and they sealed the win in stoppage time.

Although Grattans had lost to Carlow side Old Leighlin in the semi-final a few weeks ago, they were reinstated into the championship when Old Leighlin were removed from the competition.

Old Leighlin won the Leinster Junior Championship last year and rule 222 states that if you win the provincial Junior or Intermediate Championship you move up a grade the following year. For whatever reason Leinster allowed Old Leighlin to compete in the Junior grade this year and Grattans queried their inclusion which led to a special Leinster meeting.

Grattans made a great start to the game and brought two fine saves out of Kilcock keeper Eimear Kelly. Caoimhe Lohan opened the scoring with a point and then Sophie Hogan surged forward to find the back of the net minutes later.

Una Clarke converted a free to give Grattans a five point lead. Kilcock kicked over points and there was three between the sides in the 23rd minute. Two frees from the boot of Clarke restored Grattans five point advantage in the first minute of stoppage time. Caoimhe Fagan got a point just before the break to leave Kilcock trailing by 1-5 to 0-4.

A point from Grace White and a goal from Sarah Lavin left the sides level in the early stages of the second half. Grattans hit back with a goal from Una Clarke and she followed up with another free to put her side ahead by four.

A point Laura Valentine put five between the sides in the 38th minute. Kilcock came back at Grattans with Grace White scoring a goal to cut the lead to two points. Points from Clodagh Lohan and Clarke (free) gave Grattans a four point lead midway through the second half.

A point from Robinson and two White frees left just one between the sides in the 49th minute. One minute later and White put Kilcock ahead for the first time when she grabbed her second goal.

The impressive Una Clarke (who scored a total of 1-7) replied with another free for Grattans but Kilcock clinched the win with two points in stoppage time in advancing to meet Navan O’Mahonys in the Leinster Junior Club Final.