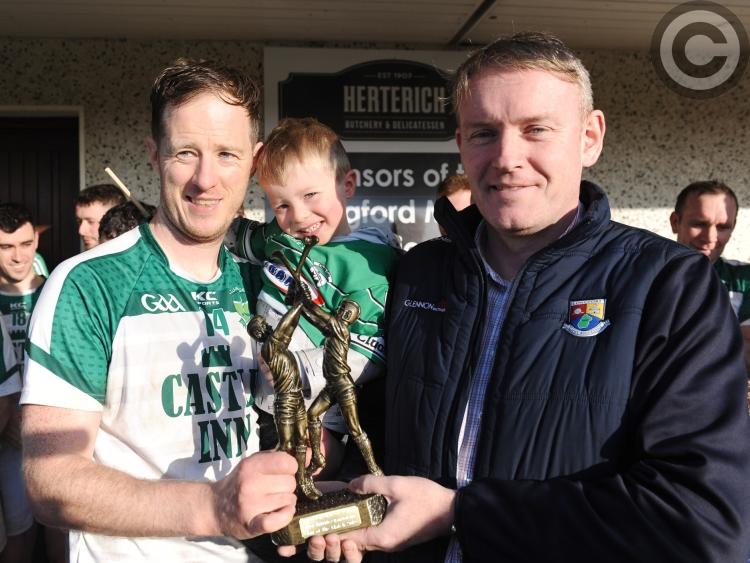 County Hurling Board Chairman Michael Carrigy presenting the man of the match award in the SHC final to Clonguish Gaels forward Joe O'Brien who is pictured with his son Cillian. Pic: Declan Gilmore

Man of the match Joe O’Brien spoke of his delight as Clonguish Gaels claimed the Longford Senior Hurling title for the first time since 2012.

He said: “It’s a very long time. Wolfe Tones have dominated the last six years. I suppose losing in the football helped this year; we got a few extra footballers and it was good to get back in here and right some wrongs after that disappointing quarter-final defeat. It’s a great day.”

Clonguish Gaels came through the group stages unbeaten and O’Brien believes the win over Wolfe Tones gave them confidence and they were able to build on that.

“We’ve done that the last few years and we just haven’t performed in the final. It was really important to get here. It bred confidence.

“We were missing a few players against Slashers the first day and dug out a win. We had a great performance the second day against Wolfe Tones. It added to the confidence coming in here today.”

O’Brien fired over 12 points (3 frees and 1’65) and was excellent throughout as he was named man of the match. The talented forward was modest about the award and praised the contribution his team-mates made.

“It’s just the way it played out; the good ball was coming in and it was coming into me. Anyone on the team could clip them over and it was just lucky that it worked out today.

“It doesn’t work everyday. The last few finals haven’t really worked for me so I was determined to make it happen today.”

Paul Barden scored the game’s only goal in the 58th minute. Barden has scored many goals for the Clonguish and Longford footballers in Glennon Brothers Pearse Park. O’Brien said: “We knew he was coming on at half-time. It gave us a massive boost. He is absolutely flying and has lost none of his flair. He is as good a hurler as anyone around.”

In the end 12 points separated the sides with Clonguish playing some very good hurling throughout the match. O’Brien said they changed their style of play to suit the type of player they have and it worked.

“We are not the most physical of teams so we try and work the ball into spaces which suits the runners.

“We have a lot of lads who are fast runners just not that physical. We have been working a lot. Damien Fox came down the last few weeks and we’ve been doing great drills with him.”

Clonguish now look forward to representing Longford in the Leinster Club Junior Championship. They take on Wicklow side Barndarrig in Glennon Brothers Pearse Park this Saturday, throw-in 1.30pm. O’Brien is hoping hurler supporters in Longford can come out and lend their support.

“We look forward to it. The pressure is off going into Leinster. Wolfe Tones got to a final a few years ago. We were all rooting for them. So hopefully the county can get behind us and hopefully we can do the business.”