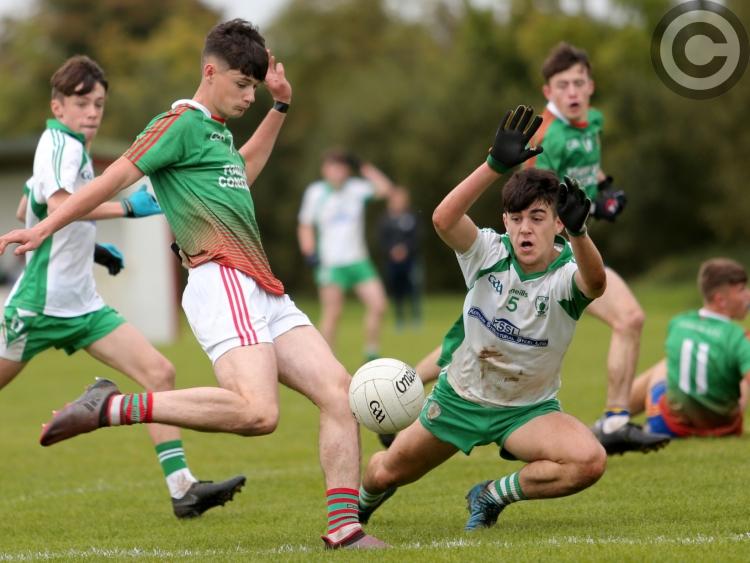 Ben Brady on the attack for St Colmcille's/St Francis with Killoe opponent Adam Donnelly bidding to block the ball. Action from the Minor semi-final on Sunday last. Picture: Syl Healy

Macken was excellent for the Colmcille and Dromard amalgamation who deserved their win in the U-18 semi-final at C&D Devine Park, Edgeworthstown on Sunday last.

They started the game well but trailed by a point at half-time. A fantastic free from Macken in second half stoppage time brought the game to extra-time. St Colmcille’s/St Francis were ahead by two in the second half of extra-time when their keeper Ollie Duffy brought off a fine save to deny Cormac Harte a goal for Killoe.

St Colmcille’s/St Francis created several goal opportunities throughout the game but failed to take any due to poor shot selection and some good saves from Killoe keeper Shane Igoe.

Aaron Farrell kicked over two fine early points for Colmcille/Dromard in the opening minutes but Killoe Og (minus the injured James Moran) took the lead in the eighth minute when Reece Leonard shot low to the net for a well-taken goal.

Macken and Cian Dooner exchanged points before Fionn Hourican and Macken helped restore their side’s two point advantage. Killoe were dealt a  blow in the 12th minute when Darren Moffett was dismissed after receiving a black card and soon after Shane Igoe put Hourican off as he went through on goals.

A great point from Leonard drew Killoe level but Jamie Conroy replied for the north Longford side. Points from Killian Feeney and Jonathan Borland gave Killoe a slender lead at half-time: 1-4 to 0-6.

A free converted by Jack Macken levelled the game but points from Bernard Borland, Dooner (free) and Leonard put Killoe ahead by three by the 37th minute. Igoe then brought off a great save in the 41st minute when he tipped Fionn Hourican’s goal attempt over the bar for a point.

Down the other end Reece Leonard was unlucky to drag his shot wide. Killian Feeney followed up with his second point of the game but Aaron Farrell and Jack Macken (free) were in fine form and got scores to keep Colmcille/Dromard in the game.

Another Cian Dooner free put Killoe ahead by two again in the 53rd minute. Colmcille/Dromard created goal chances but couldn’t find the back of the net.

A lovely Macken point cut the gap to the minimum and in stoppage time he pointed a free to bring the game to extra-time with the sides deadlocked, 1-9 to 0-12.

Dooner kicked over the first point in  extra-time. Minutes later Matt Duffy’s shot came off the post and Darren Walsh hit the side netting with his effort. An excellent point from Conor McGauran drew the sides level again and a pointed Macken free edged Colmcille/Dromard ahead in the 69th minute.

Macken was on target again from a free in the second half of extra-time. Killoe needed a goal but were thwarted by a very good save from Ollie Duffy in the 75th minute.

Aaron Farrell kicked a point in the 80th minute while Jack Macken sealed the win with a terrific point in the first minute of stoppage time as Colmcille/Dromard advanced to meet Granard or Longford Slashers in the Harte Cup final.