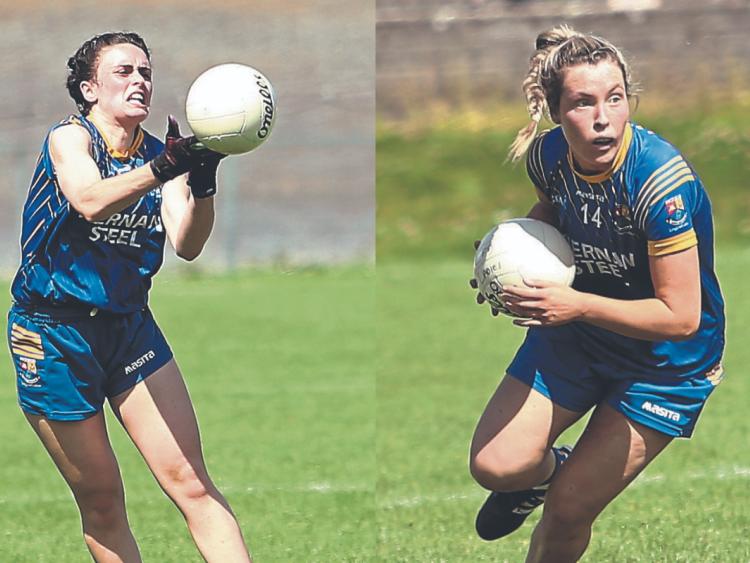 Clare Farrell (left) will line-out for Longford Slashers while Aisling Greene will be in action for Clonguish in the Ladies Football Senior 'A' Championship Final. Pics: Syl Healy

Since Slashers reformed back in 2008 they have enjoyed underage success which culminated with them winning the Junior A title back in 2017, the Intermediate title last year and now they are looking to claim their first Senior ‘A’ title since 1982.

Slashers reached the Gold Cup final this year but lost to Carrickemond. They’ve had a very good championship so far and are undefeated. They had victories over Ballymahon/Forgney/Killashee and last year’s winners Carrickedmond before defeating Dromard in the quarter-final and last year’s beaten finalists Killoe by three points in the semi-final.

They have quality players all over the field with several county players to call upon; Aine Barry, Clare Farrell, Kara and Grace Shannon, Eimear O’Brien and Orla Nevin and they also have Jessica Barry, Aisling Cosgrove and Ciara Nevin.

Kara and Grace were excellent in the All-Ireland Minor ‘B’ Final while Grace also won an All-Ireland U-16 medal with Longford this year to complete a magnificent double.

Slashers will be looking towards their experienced players to help them overcome Clonguish who also have a good blend of youth and experience. On their path to the final Clonguish have defeated Mostrim and Ballymahon/Forgney/Killashee and then dethroned the reigning champions Carrickedmond in the semi-final, winning by four points in what was an excellent game of football.

Clonguish have leaders all over the field and like Slashers have several county players in their squad. Ciara Healy, Aishling Greene, Mairead Moore, Ciara Sutton, Niamh and Aoife Darcy but they  are without Sinead Macken who sustained a serious knee injury earlier this year.

Kamille Burke, Teni Alaba and Hannah Glennon are some of their rising stars with Burke claiming the player of the match award in the Leinster U-16 ‘B’ Final. Ciara Healy won the player of the match honour in the All-Ireland Minor ‘ B’ Final. She will be one player Clonguish will look towards on Saturday and Slashers will have to watch her very carefully.

There will be key battles all over the field and it will be interesting to see the various match-ups. Slashers missed several scoring chances against Killoe and know they will have to put away their chances in the final on Saturday.

Clonguish have the experience of being in senior finals before and know what it takes to become county champions. A senior final may be a new occasion for Slashers but they will not fear their neighbours. Both sides are evenly matched and a tight encounter is in prospect.

B' silverware consolation for Carrickedmond or Killoe

The Ladies Football Senior ‘B’ Final is a repeat of last year’s Senior ‘A’ Final when Carrickedmond take on Killoe in the curtain-raiser to the big game between Clonguish and Slashers at Glennon Brothers Pearse Park this Saturday, 1.30pm.

Carrickedmond claimed the Division 1 title earlier this year and were hoping to complete a league and championship double but lost to Clonguish in the Senior ‘A’ semi-final.

Carrickedmond have enjoyed success at underage levels. They have a blend of youth and experience. Several players have donned the county jersey too. They will be looking towards the likes of Sarah Shannon, Shauna McCormack, Ann Ryan, Michelle Hannify Mulvey and Michelle Noonan.

They also have some players who have returned to the panel and they’ll be hoping to claim more silverware for the club.Killoe are backboned by Fiona Toher, Jacinta Brady, Laura Gallagher and Anna McDonnell. They, like Carrickemond, have a nice mix of youth and experience.