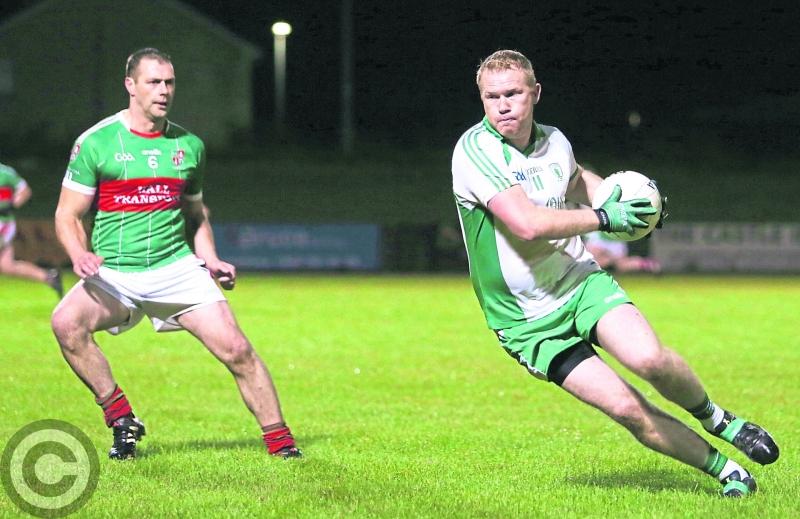 Paul O'Hara on the attack for Killoe in his bid to get past Colmcille defender Francis Kavanagh. Action from the Junior semi-final at Allen Park on Friday night last. Picture: Syl Healy

Goals from David McCarthy and substitute Cormac O’Reilly in the second half swung the issue in favour of Killoe who came from six points down to beat Colmcillle in the Junior Football Championship semi-final at Allen Park, Newtownforbes on Friday night last.

Colmcille then had a great goal chance saved by Killoe keeper Brian Carr and the first half finished with a Shay McKeon point from play as Killoe trailed by 0-7 to 0-2 at the break.

Niall Brady opened the scoring in the second half for Colmcille before David McCarthy brought Killoe right back into the game with a well taken goal.

Colmcille were reduced to 14 players midway through the second half when Seanie McKeon was sent-off after receiving a second yellow card and this was a significant setback.

A Colmcille point from Eoghan Hawkins followed and Killoe then missed two very easy free chances to close the gap but they eventually began to get the upper hand with points from play by Ronan Keogh, Paul O’Hara and Niall Finneran.

Further points from a Terry McCormack free and Paddy Hughes from play left Killoe 1-7 to 0-9 ahead and then came their second goal from substitute Cormac O’Reilly.

A high ball in deceived Colmcille keeper Colm Kilbride and the ball just dipped into the net to leave four points between the teams, 2-7 to 0-9.

Colmcille finished the game with two further points from frees converted by Shay McKeon but time ran out for the north Longford side as Killoe held on for a final  showdown against Kenagh.