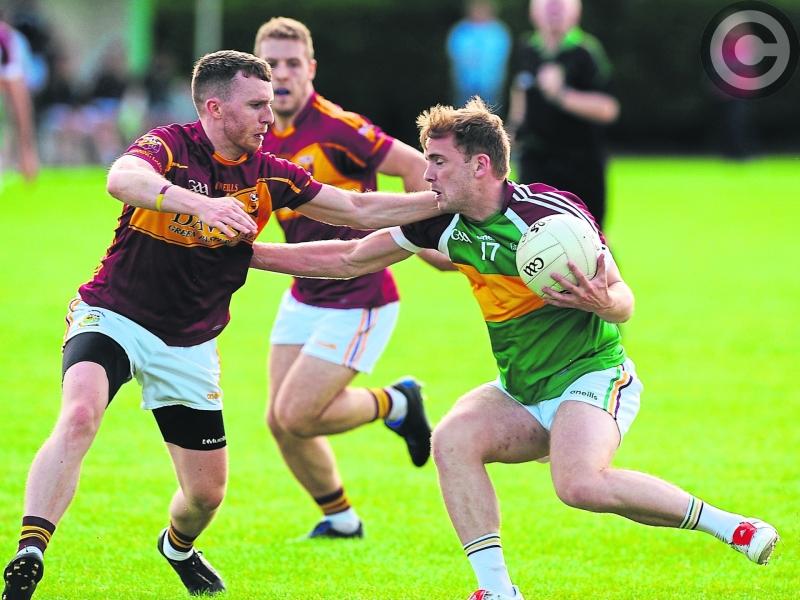 Daryl Carrigy on the attack for Ardagh Moydow but blocking his path is Fr Manning Gaels defender Derek McCormack. Action from the IFC Group stage game at the end of July. Picture: Declan Gilmore

Former senior football champions Ballymahon (2002) and Fr Manning Gaels (who last captured the Connolly Cup in 2001) are currently operating in the second tier grade and the general opinion is that one of these clubs will win the Intermediate title this year.

Ardagh Moydow, the beaten finalists last season, will obviously have a different view as to where the Gerry Hennessy Cup will end up on the last Sunday in September after going so close to championship glory in the tremendous trilogy against Rathcline.

Those three games generated a lot of excitement before the issue was eventually resolved after a second replay and Ardagh Moydow, now officially established as a single club, will be hoping to go one better in 2019.

Vastly experienced coach Declan Rowley is back in charge and while his side had to work very hard for a slender two point win over injury hit Cashel in the quarter-final there is plenty of room for improvement.

With quality forwards in Killian Farrell and Daryl Carrigy (the latter missing out on the knockout stages of last year’s championship due to injury), Ardagh Moydow will be quietly confident of reaching the county final for the second year in succession.

Ballymahon, who were relegated from the senior grade last year, are determined to bounce back and their main man is unquestionably powerful midfielder Kevin Diffley.

Mark Connor and Kyle Fitzmaurice are the key players in a generally sharp attack and the south Longford side are responding well to manager Ken McKinley with the former Westmeath player in his second season at the helm.

Ballymahon came through the group stage unbeaten run with comfortable wins over Cashel and Sean Connolly’s and a draw against Killashee but are now facing their toughest test so far against Ardagh Moydow with a close contest expected in the semi-final at Glennon Brothers Pearse Park this Saturday evening, throw-in 6.30pm.

Former Mostrim manager Jack Lynn is making his presence felt with Fr Manning Gaels who won all three games to finish top of the other group which included a fairly significant 1-15 to 0-12 success over another of the title contenders Ardagh Moydow.

The return of Darren Farrelly from the United States is a definite boost and with other talented players in Pauric Gill and Martin Cassidy operating in the forward division the scoring power is certainly there for the Drumlish/Ballinamuck side in their bid to win the championship.

Providing the opposition in the second semi-final at Glennon Brothers Pearse Park (4pm) this Sunday (curtain-raiser to the Colmcille and Killoe senior showdown) will be St Brigid’s Killashee.

It will be a major surprise if Fr Manning Gaels fail to make it through to the title decider but they can take nothing for granted against the complete outsiders  who had the benefit of an extra game in the quarter-final replay last weekend.