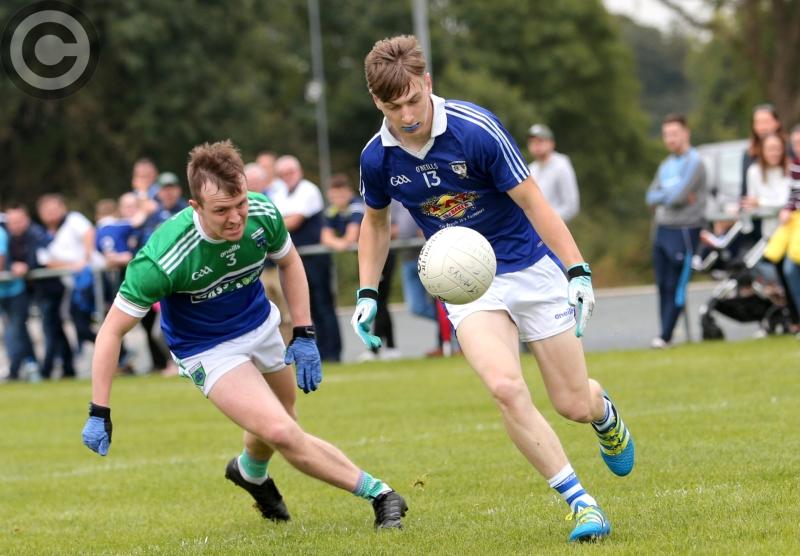 Jordan Martin on the attack for Granard in breaking away from Rathcline defender Niall Keane. Action from the SFC relegation play-off on Sunday last Picture: Syl Healy

Rathcline registered a vital victory in the first round of the Senior Football Championship relegation play-offs at Keenan Park in Ardagh on Sunday last and left St. Mary’s Granard in a fierce battle to avoid the drop down into the Intermediate grade.

Denis Connerton’s charges were full value for this win. They got goals at crucial stages and when Granard cut the gap back to three points in the 58th minute, substitute Gareth Reilly scored a crucial point for Rathcline. The Lanesboro lads defended resolutely in the final minutes as Granard piled the pressure on with Derek Casserly particularly excellent.

Liam Connerton opened the scoring inside the first minute with Jordan Shiels and Darren Gallagher (free) replying for Granard. That was the first and only time St Mary’s were ahead in this game.

Twice Rathcline were in front by two points but twice Granard cut the gap to one point. Two points from Oran Kenny (one free) and a fine Aaron Madden point put Rathcline five ahead by the 23rd minute.

Stephen Lynch’s powerful strike rattled the crossbar and went over for a much needed Granard point in the 25th minute with Darren Gallagher, on his return from the United States, converting a couple of  frees to reduce the deficit to two points.

Rathcline got their first goal in the 28th minute when they dispossessed Granard and James Hanley played the ball to James Carroll who made no mistake in finding the back of the net. Gallagher and Jordan Martin (free) replied for Granard while Iarla O’Sullivan pointed for Rathcline as they held a four point lead at half-time, 1-10 to 0-9.

Two minutes into the second half Rathcline got their second goal. Once again they dispossessed Granard with Liam Connerton shooting to the net. Jordan Shiels fired over a point for Granard before another score from Iarla O’Sullivan and two Oran Kenny frees gave Rathcline a nine point lead by the 37th minute.

Granard replied with two Darren Gallagher frees and an excellent Mark Connell point in the 47th minute but just like before they were caught out moments later with Aaron Madden finding the back of the net for Rathcline.

The introduction of substitutes for Granard improved matters. Gallagher and Fergus Kelly kicked over points before St Mary’s were awarded a penalty in the 53rd minute when Gallagher was taken down. He stepped up to take the kick and duly dispatched the ball to the back of the net.

Rathcline’s David Rooney received a black card in the 56th minute and two minutes later Granard cut the gap to three points when Jordan Martin fired over a free. Momentum appeared to be with St Mary’s but Rathcline won possession and it ended with substitute Gareth Reilly kicking over the insurance point.

Granard tried hard to get scores in the final minutes but it was all in vain as Rathcline were resilient in defence with Derek Casserly winning a vital ball when Granard were going for a goal.

St Mary’s are now facing a must win match against Mostrim in Round 2 of the relegation play-offs at Allen Park, Newtownforbes this Friday night, throw-in 8.30pm.