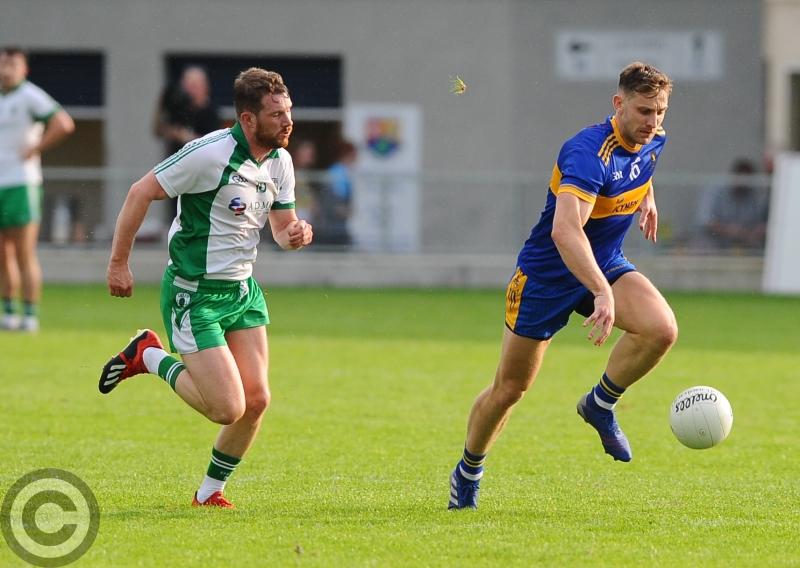 Ronan McEntire on the ball for Dromard with Killoe opponent Denis McGoldrick in pursuit. Action from the SFC quarter-final. Photo: Declan Gilmore

The greater pace of the younger Killoe team proved to be a decisive factor in their win over Dromard in the Senior Football Championship quarter-final at Glennon Brothers Pearse Park on Saturday evening.

After leading by 0-8 to 0-4 at the break, Emmet Og appeared to be in control when they stretched their advantage to five points but Dromard got right back into contention with a great goal from Cian Mimnagh in the 41st minute.

A couple of points quickly followed from Joe Hagan and Ronan McEntire to leave the sides all square but Killoe regained the upper hand on their path to the last four when Daniel Mimnagh burst through to plant a cracking shot in the back of the Dromard net midway through the entertaining second half.

Soon after Dromard were furious with the decision of referee Gerard Egan not to penalise Michael Quinn for what appeared to be a blatant foul on Francis McGee close to the posts and awarded a free out to Emmet Og instead.

In the immediate counter-attack Killoe substitute Cian Dooner had a goal attempt saved by opposing keeper Gavin McNerney but the alert Dooner collected the breaking ball to shoot over the bar.