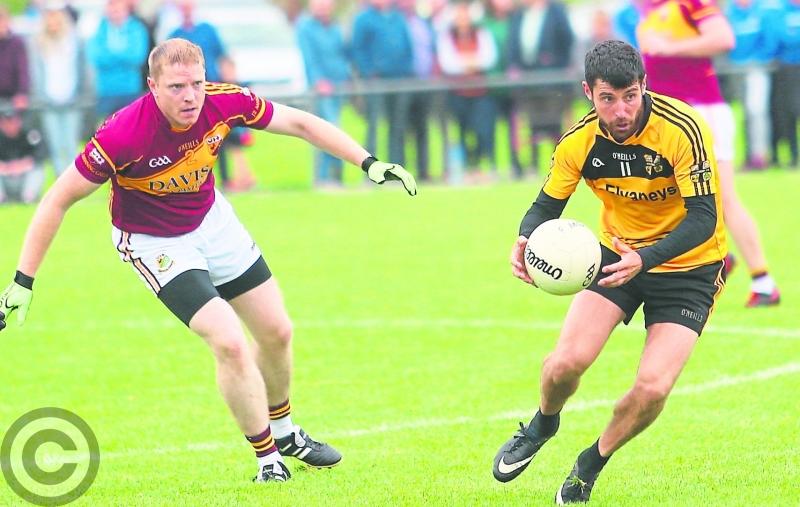 Damien Monaghan on the attack for Ballymore in facing a challenge from Fr Manning Gaels defender Cian Brady in the Intermediate Championship first round game. Photo: Syl Healy

A strong second half performance saw Fr Manning Gaels gradually assert their superiority over Ballymore in the opening Group 2 game in the Intermediate Football Championship at C&D Devine Park in Edgeworthstown on Saturday evening last.

There was just one point between the sides at the break (0-11 to 2-4) after Ballymore had worked their way back into the game with goals from Damien Monaghan and Ciaran Reilly.

But they had no answer for Fr Manning Gaels in the second half as Jack Lynn’s charges were ruthless in attack with Martin Cassidy and Pauric Gill their main men, clocking up the impressive total of 1-13 between them.

The Gaels finished the game with 14 players after Liam Lynch was sent-off for two yellow cards but it made no difference.

Straight from the throw-in the Gaels created a goal chance with Emmet Noonan bursting through and bringing an excellent save out of Ballymore keeper Alan Kiernan.

Paddy Collum kicked over the resulting ‘45. He added another one before Cassidy fired over two points (one free) and Gill was on target to open up a five point lead by the 12th minute.

Dean Cosgrove kicked over a neat point one minute later as the Gaels went six ahead. Out of nothing Ballymore created a goal chance in the 16th minute with Collum pulling off a good save to deny Donal McElvaney.

Damien Monaghan (free) registered Ballymore’s first score of the game and he followed that up with a goal. David Reilly kicked over a good point and then a Monaghan effort levelled matters in the 22nd minute.

The Gaels replied with four points while Monaghan fired over another free for Ballymore who trailed by three in the 28th minute.

Gill put four between the sides in stoppage time but a quick free ended with Ciaran Reilly finding the back of the net for Ballymore one minute later to leave just the minimum of margins separating the sides at half-time.

Pauric Gill hit over the first point of the second half and he brought two fine saves out of Alan Kiernan minutes later before Ballymore conceded a penalty. Collum stepped up and made no mistake to score the first goal for the Gaels.

Monaghan and Glen Kelly fired over frees for Ballymore while Gill fisted over a point in the 43rd minute. Twice Ballymore cut the gap to two points but that was the closest they came to the Gaels as a strong finish in the final quarter saw them take complete control.

With Martin Cassidy in great form the lead was six points in the 53rd minute. He then followed up with two excellent points to extend the advantage further. It was all Drumlish at this stage as Ballymore weren’t able to get back into the game.

Pauric Gill scored a fantastic goal in the first minute of stoppage time and then substitute Ryan Crowe grabbed their third goal two minutes later. Ballymore got the last point of the game through Bernard McElvaney.