Outstanding Longford U-16 ladies win the All-Ireland ‘B’ title

Second half goals wipe out Waterford 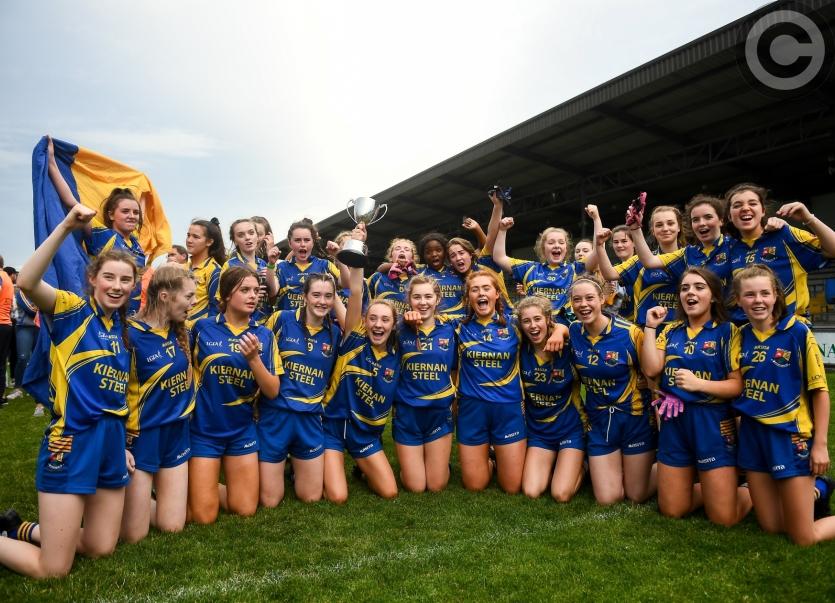 Trailing by a point at the break (2-4 to 0-9), the outstanding Longford ladies football U-16 side scored four goals in the second half to wipe out Waterford in the All-Ireland ‘B’ championship final at St Brendan’s Park in Birr on Wednesday evening.

Waterford keeper Nessa Nic Iomhair pulled off an excellent save to deny Lauren McGuire in the eighth minute. Moments later she denied McGuire again and in the 10th minute she saved Melissa O’Kane’s effort with her feet as Longford piled on the pressure.

Waterford went ahead by a point in the 11th minute through Aoife Brazil but points from Kamille Burke and Lauren McGuire (2) gave Longford the lead by the 15th minute.

The game changed in Waterford’s favour in a two minute spell when Aine O’Neill grabbed their first goal and then Longford conceded a penalty which was converted by Hayley Phelan to put the Munster champions ahead by five points.

Great credit to Longford who refused to be rattled and they ended the first half really well to outscore Waterford by five points to one in the final 10 minutes. Waterford’s Roise Ni Mhuiri was sin binned in the 28th minute and one minute later Melissa O’Kane levelled for Longford. A free from Phelan gave Waterford a slender lead going in at the break.

Longford started the second half brightly and hit the front in the 34th minute with a goal from Molly Mulvihill but Waterford broke and Phelan found the back of the net with a great shot.

The Leinster champions response was emphatic with another goal from full-forward Mulvihill and they gradually pulled away with further goals from Kamille Burke and substitute Ella Duggan in the closing stages to put the issue beyond all doubt.

Congratulations to the entire squad and the management team of Paul McGuire (manager), Eugene Quaine and Danielle McLoughlin on achieving All-Ireland glory.