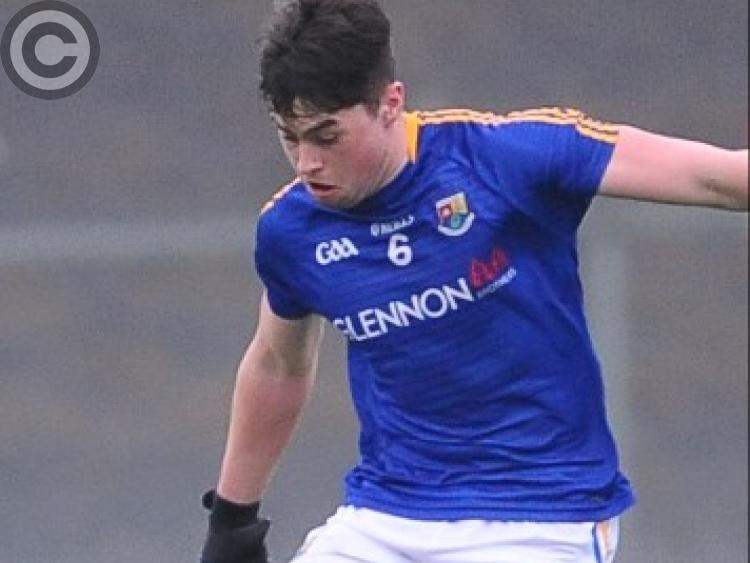 Conor Farrell, who scored the goal for the Longford juniors in the first half against Kildare. Photo: Declan Gilmore

The Longford junior footballers failed in their bid to reach the Leinster Final at Croke Park when they found the going too tough against a stronger Kildare side at St Conleth’s Park, Newbridge on Wednesday evening.

The lilywhites, who led by 0-11 to 1-4 at the break, were able to bring on former senior star Johnny Doyle in the second half and he certainly made his mark to fire over three points in this emphatic victory in setting up a meeting with Meath in the provincial title decider on Sunday 23 June, curtain-raiser to the Leinster senior final.

Kildare were sharper throughout the game and took their scores. Within the opening minute they  registered the first score with a point from Jack Robinson and Padraig Nash added two points (one free) in a bright start for the home county.

Two more points from Robinson gave them a five point lead by the 9th minute. Two minutes later Longford finally got off the mark with a point from Joe O’Brien.

Back came Kildare with a  fisted point from Eoin Lawless. A free from Nigel Rabbitt and a neat Conor Farrell point cut the gap to three by the 17th minute. Longford (managed by Padraic Davis) were beginning to get into the game and in the 22nd minute they were level when a fine move ended with Aidan McGuire passing to Conor Farrell and he found the back of the net.

Kildare responded with points from Robinson and Nash. Longford keeper David Mulvihill then pulled off a good save in the 26th minute and straight after that Rabbitt pointed to close the gap to the minimum of margins.

In the closing stages of the first half Kildare showed their superiority on the scoreboard,  kicking over three points in a row to lead by four going into the second half.

Kildare extended their advantage in the early stages of the second half with a neat point from Barry Noone. Then came the biggest cheer from the crowd when the legendary Johnny Doyle was introduced in the 34th minute.

Kildare tagged on two more points with Seamus Hanafin unlucky to see his effort come off the upright but he picked up the loose ball and kicked it over the bar.

After going 18 minutes without a score Longford got a much needed point through Aidan McGuire in the 40th minute. Shane Farrell followed up with an excellent effort before Johnny Doyle fired over his first point of the game and then converted a free.

Kildare put the issue beyond all doubt with a well struck goal from Jack Robinson in the 46th minute and a third score from Doyle (a great strike) left Kildare in a very commanding ten points lead.

Joe O’Brien and substitute Fergal Sheridan got late consolation points for Longford in this disappointing defeat.