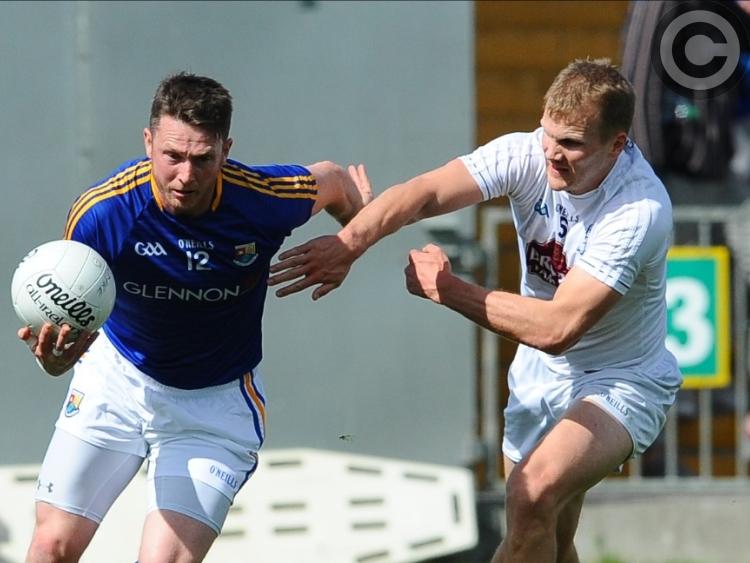 Michael Quinn pictured in action for Longford against Kildare.

Fortunate to survive in the drawn encounter when they were saved by the upright, Kildare made no mistake at the second attempt in cruising to a comprehensive win over Longford in the Leinster Senior Football Championship quarter-final replay at Bord na Mona O’Connor Park in Tullamore on Sunday.

Although their overall superiority was not reflected on the scoreboard in the first half as they squandered several chances (including a couple of clear-cut goal attempts) and thus had to be content with a slender 1-4 to 0-4 lead at the break, Kildare made good use of the wind advantage on the changeover in pulling right away with the wide margin of 11 points separating the sides in the finish.

While the lilywhites move on to meet All-Ireland champions Dublin in the Leinster semi-final at Croke Park on Sunday next, Longford are heading for Netwatch Cullen Park to confront Carlow in Round 1 of the All-Ireland Qualifiers and manager Padraic Davis must now lift the players in the aftermath of this disappointing defeat.

Longford were second best in most positions on the pitch with the lightning pace of Kildare attacker Ben McCormack posing a lot of problems.

From the moment Fergal Conway burst his way through to blast the ball into the roof of the net in the 18th minute the underdogs were facing a real uphill battle in their bid to cause an upset.

To make matters worse, Barry McKeon was forced to retire injured following this major score and nothing really went right for Longford who shot five wides in the first half.

Much improved Kildare were operating at a different level on this occasion and Longford were just not good enough, much to the sheer dismay of their supporters among the attendance of 4,326.

Six of their ten points came from frees with none of the starting six forwards managing a score from play during the course of the game.

Landing some great scores, Kildare registered the impressive total of 14 points in the second half and were far too strong for a Longford team hard hit by the absence of a few key players.