Longford conquer Carlow to continue unbeaten run in the league 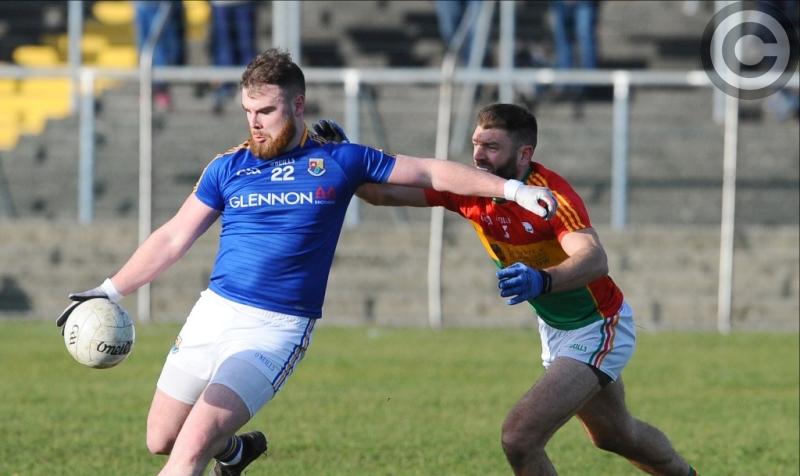 What a wonderful start to the reign of Padraic Davis as the new manager of the Longford senior football squad as the unbeaten run in Division 3 of the National League continued with a tremendous away win on Sunday last.

A fancied Carlow side were conquered in front of a big 1,500 attendance at Netwatch Cullen Park with influential substitute Conor Berry scoring the crucial goal in the closing stages of the game (61st minute) to settle the issue and leave Longford at the top of the table.

Minus the Mullinalaghta players as they prepare for the All-Ireland club semi-final against Dr Crokes Killarney this Saturday, the general opinion was that the county team were facing a tough battle in such a competitive league but relegation would appear to be no longer a threat after collecting five points out of a possible six from their first three fixtures.

Some fringe members of the side, along with a number of newcomers, have really stepped up in showing a fierce desire to succeed and Longford will be serious promotion contenders if they should manage to win at home against Down in the next round on Sunday February 24.

But before the supporters get carried away with the latest positive result it might well have been a different story had Carlow converted a penalty in the 32nd minute of the first half, at a stage when they led by 0-5 to 0-4.

Left-half-back Conor Lawlor surged forward in breaking through a few tackles before he was eventually brought down in the square but the subsequent spot kick taken by Daniel St Ledger came back off the post in what was a very lucky escape for Longford.

Carlow had created another goal opportunity in the 22nd minute, only for defender Chris Crowley to flick the ball straight at opposing keeper Paddy Collum, and the visitors ended up on level terms at the break, 0-5 apiece.

Starting without the injured ace attacker Robbie Smyth, Longford played against the stiff wind in the first half and with both sides operating the blanket defence system scores were very scarce in a very frustrating game to watch.

Wing back Colm P Smyth fired over the opening score for Longford in the 5th minute and their other four scores in the first half were registered by Liam Connerton, Nigel Rabbitte and a couple of frees converted by Darren Gallagher.

Darragh Foley (2), defender Jordan Morrissey, Darragh O’Brien (free) and Sean Gannon got the Carlow scores and they hit the front with another point from full-forward O’Brien with eight minutes gone in the second half.

Longford replied immediately with a brilliant strike from 18-year-old Joe Hagan with the lively substitute on target from the tightest of angles.

That inspirational score gave Longford a great lift and after Liam Connerton fired over the lead point soon after the advantage was extended when a speculative ball in from Colm P Smyth hopped over the bar.

Now making good use of the wind, the visitors went further ahead when Conor Berry landed a great score from a tight angle in the 51st minute and that was really putting the pressure on Carlow but they battled back to close the gap to the minimum of margins, 0-9 to 0-8.

A brace of close range frees were fired over in quick succession by Paul Broderick, last year’s All-Star nominee who was unable to start due to injury but the talented forward was brought on in the early stages of the second half.

Carlow were looking like getting something out of this tight contest but were struck by a killer blow when a centre from Colm P Smyth was finished to the net by Conor Berry who used his physical strength to fine effect.

Moments later, in the 62nd minute to be precise, Carlow’s suffered another severe setback with the dismissal of midfielder Sean Murphy for a second yellow card offence.

Down to 14 men and trailing by 1-9 to 0-8 there was no way back for the shattered home county and Longford went five points clear when Darren Gallagher converted a free in the 69th minute.

Midfielder Gallagher then received a black card a minute later to spend the stoppage time in the sin bin but it did not matter as the game was already won.

Broderick (free) and the overall impressive Daniel Mimnagh exchanged scores during the remainder of the match with Longford showing a lot of heart and character to emerge victorious.

Mimnagh got good support from Barry McKeon and Colm P Smyth in the half-back-line and the entire resolute defence worked so hard to keep the Carlow attack at bay.

The energetic Michael Quinn figured most prominently at midfield, alongside the also influential Darren Gallagher.

Liam Connerton looked sharp in the full-forward-line, shooting a couple of vital points, and let us not forget the vital contribution of Conor Berry with 1-1 to his credit with another replacement Joe Hagan also making his mark in this very important win.