Goals crucial in one point win over Wolfe Tones 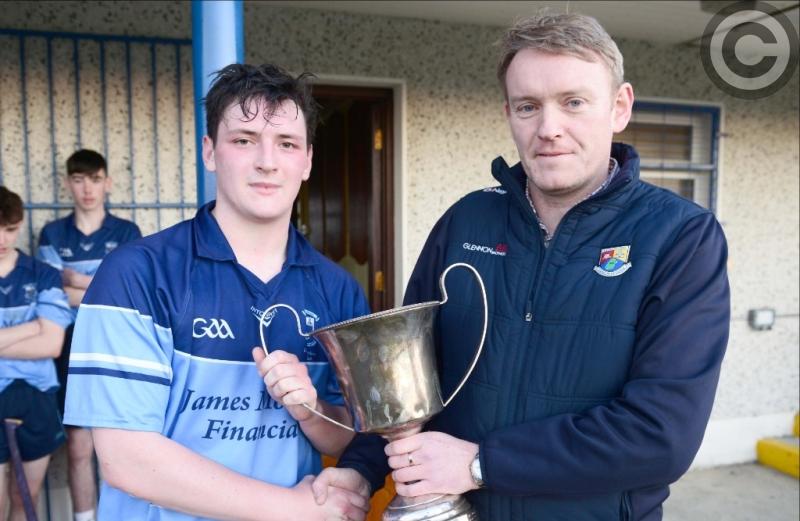 Longford Slashers produced a fine display to defeat the reigning champions Wolfe Tones Mostrim and claim the Minor Hurling title for the first time since 2014.

Wolfe Tones showed why they were champions for the last three years and they didn’t give up their crown without a fierce fight. In the end goals win games and the five that Slashers scored proved crucial in the final at Glennon Brothers Pearse Park on Sunday last.

In an entertaining game of hurling both sides ended the game without their full complement of players; Slashers had Darragh Maher sent off for a straight red card just before the break while Wolfe Tones’ Ethan Dolan (straight red) and Tiarnan Hussey (second yellow) received their marching orders in the second half.

Wolfe Tones made a good start to the game with Padraig Joyce firing over three frees inside the opening five minutes and Tiarnan Hussey with a good point to give them an early four point lead.

Ronan Kenny raced through in the 10th minute to register Slashers’ first point on the board. Kenny had an effort come off the post four minutes later but his low shot found the net in the 16th minute to leave Slashers on level terms.

In the 18th minute Kenny got his and his side’s second goal. Joyce replied with a nice point for Wolfe Tones before Slashers took a hold on proceedings. Kenny hit over two frees and in the 27th minute Dean Wykes got a third goal for Slashers to put them ahead by seven points.

A Joyce (free) was followed by a goal from Evan Tully. Conor Heaney then scored a point to cut the gap to two. In first half stoppage time Slashers were dealt a blow when Darragh Maher was sent-off as they led by 3-3 to 1-7 at the break.

Wolfe Tones were level  five minutes into the second half. Two minutes later and Slashers were back in front when a ball in from Sean Creevy was flicked into the net by Donal Sheahan.

Padraig Joyce was on target again for Wolfe Tones minutes later before they were reduced to 14 players when Ethan Dolan was sent-off. Joyce reduced the deficit to just one point in the 41st minute.

With two evenly matched sides the game was level again in the 43rd minute when sharpshooter Joyce hit over a neat point. Just like before the Slashers response was terrific and they got a fifth goal in the 46th minute through Ronan Kenny.

Two minutes later and Wolfe Tones were down to 13 players when Tiarnan Hussey was sent off for a second yellow card. Credit to the champions though they never gave up and despite numerical disadvantage they really put it up to Slashers in the final 10 minutes.

Both sides were guilty of missing opportunities in a nervy ending. Padraig Joyce fired over another free in the first minute of stoppage time and he was on target again moments later to cut the gap to just one point.

But time ran out for Wolfe Tones in their bid to snatch a dramatic last gasp equaliser as Slashers held on for a great win.