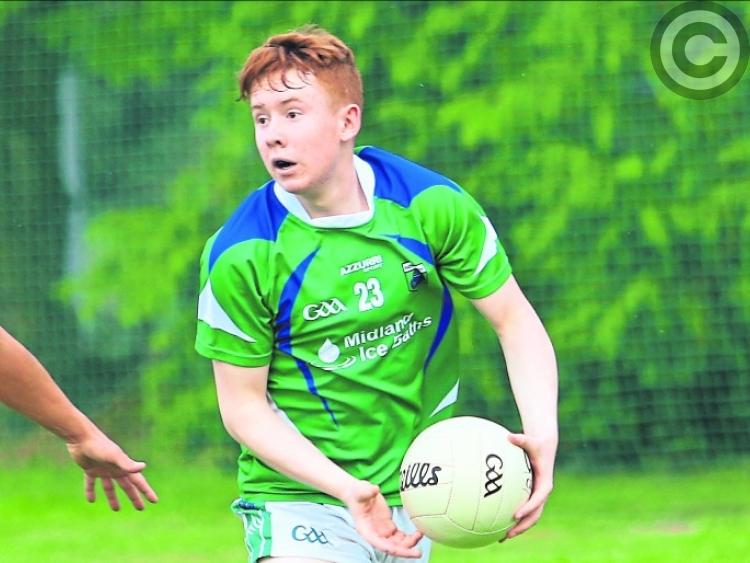 Oran Kenny, who was Rathcline's top scorer with five points in the narrow defeat against Horeswood in New Ross.

A shattered Rathcline left it all on the field in O’Kennedy Park, New Ross on Saturday but they came up a fraction short in their bid to reach the Leinster Intermediate Club Football Championship semi-final.

For long spells of the game Rathcline looked to have the upper hand on Wexford opponents Horeswood, leading as late as the 50th minute, but Declan Murphy’s goal proved to be the decisive score for Horeswood.

The winners actually finished the game with twelve men while the Longford Intermediate champions had goalkeeper David Mulvihill sent-off in stoppage time. As is often the case, it was the first of three Horeswood dismissals in the 50th minute that sparked them to life, coming as it did, two minutes before the critical goal.

Oran Kenny got Rathcline on the scoreboard in the 18th minute following a lengthy injury stoppage and a further five points from Iarla O’Sullivan, Kevin Chapman, Shane Kenny and Oran Kenny (2) left the visitors leading by 0-6 to 0-5 at the break.

After Declan Murphy pulled one back, Johnny Keating was shown a second yellow card for the hosts after a foul on Connerton and Shane Kenny converted the resulting free.

Horeswood, stung by the dismissal, responded when a hopeful ball in from Barry Hearn fell at Murphy’s feet and he shot past Mulvihill to leave his side leading by 1-8 to 0-10.

Cillian Flood levelled the game for the fifth time but Darren Shannon responded moments later. Eddie Shiely was then shown a straight red card in the 56th minute for abusive language towards an official and Shane Kenny (free) landed the equaliser soon after (0-12 to 1-9).

Rathcline, with the numerical advantage, looked like hot favourites to win at this stage but but Sean Nolan twice worked space a little too easily to push Horeswood into a two point lead in stoppage time.

Rathcline laid siege to the Horeswood goal for the remaining five of eleven minutes of additional time but only got one point when Cillian Flood was on target with the second last kick of the game as Horeswood held out for a hard earned victory.