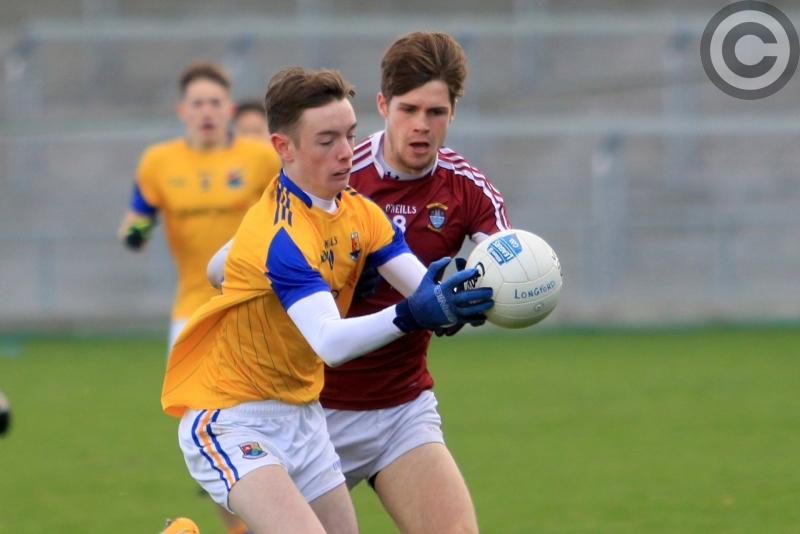 Goals in each half from Jack Duggan proved to be the difference as the Longford U-16 footballers bounced back from their narrow loss against Meath the previous week to beat Westmeath in the Fr Manning Cup Group 1 Round 3 game at Glennon Brothers Pearse Park on Saturday last.

The Clonguish lad was a real threat for Longford throughout the game. He was also excellent on frees in clocking up the impressive total of 2-8 and his second goal just after the break put the home county ahead by 10 points.

Westmeath battled their way back into the game but were unable to overcome Longford who came out on top by the comfortable margin of five points to remain in contention for the Fr Manning Cup title with the semi-final against Sligo at Glennon Brothers Pearse Park this Saturday, throw-in 11.30am.

Keelin McGann opened the scoring within seconds of the throw-in and barely one minute had elapsed when Jack Duggan got his first goal of the game and he then converted a free.

Shane Reid had a chance to opening the scoring for Westmeath in the sixth minute but he hit his low drive wide. Moments later Reid set up Ben McGauran and he made no mistake in finding the back of the net.

Longford then took over completely and Duggan kicked over two frees before Sheahan scored another fine point in the 23rd minute to extend the lead.

Duggan converted another free and landed a neat point from play before Diarmuid Kelly scored a fine point to leave Longford leading by 1-10 to 1-2 at the break.

Westmeath’s chief marksman Ben McGauran got the opening point of the second half before Cathal Gilligan created the opportunity for Jack Duggan for Longford’s second goal.

Westmeath though fought back with McGauran firing over three frees and Ronan Hanly landing an excellent point as they closed the gap before Longford got their next score from a Jack Duggan free in the 41st minute.

Westmeath replied with  a neat Conor Byrne point and then Jack Duggan and Ben McGauran were on target from frees. Another free from McGauran in the 55th minute brought Westmeath to within five points of Longford.

The sides shared four more points in the closing stages of the game with Jack Duggan and Diarmuid Kelly on target for Longford while Shane Reid and Ben McGauran got the Westmeath scores.