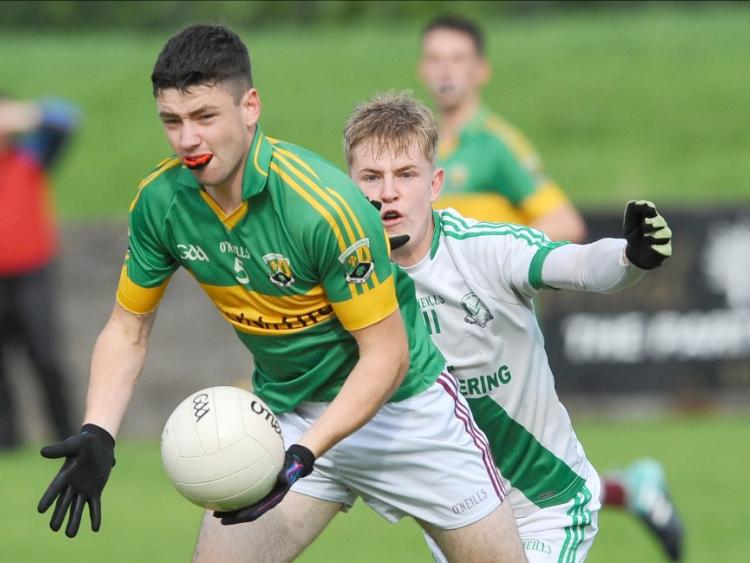 Conor Carroll on the ball for Ardagh/Moydow in evading the challenge of Killashee opponent Cillian Lee. Action from the recent Intermediate Championship quarter-final at Allen Park. Pic: D Gilmore

Title holders Rathcline recovered from the surprise defeat against Ballymore in the group stage to conquer neighbouring rivals Cashel in the quarter-final and they now face Fr Manning Gaels this Saturday evening, throw-in 5pm.

After suffering the setback of relegation from the top flight last season, the Gaels are moving in the right direction in their desire to make an immediate return to the senior grade but a cause for concern is the injury doubts over their most influential figure Pauric Gill.

County player Gill was forced to retire midway through the first half of their remaining group fixture against Cashel a few weeks ago and while the Drumlish/Ballinamuck side ended up losing that match by the narrow margin of two points the result was immaterial as they were already through to the last four.

A fully fit Gill is a vital factor for Fr Manning Gaels in their quest to reach the Intermediate championship final and their other key men are Diarmuid Cooney, Emmet Noonan and Dylan Quinn.

Taking into account that Rathcline started with an understrength team in losing out to Ballymore, having secured their place in the knockout stages prior to that game, they are still generally regarded as the favourites to win the Hennessy Cup for the third time in the space of four years.

Powered by Longford senior squad members Liam Connerton, Shane Donohue and Shane Kenny and a few other useful footballers, the Lanesboro side appear to be that bit stronger than Fr Manning Gaels and will probably come out on top.

After struggling at one stage in the group phase, the amalgamation of Ardagh St Patrick’s and Moydow Harpers eventually came good when it mattered most in scoring a very  emphatic seven point win over Sean Connolly’s and in the process knocked last year’s beaten finalists Ballinalee out of the championship.

Improving steadily under the guidance of their vastly experienced coach Declan Rowley, further progress was made with a comfortable 0-15 to 1-5 win over Killashee in the quarter-final with St Brigid’s grabbing the consolation goal deep into stoppage time.

Next up for Ardagh/Moydow are the championship dark horses Ballymore in the second semi-final on Sunday (throw-in 5pm) and it must be said that the north Longford side (managed by Abbeylara clubman Mickey O’Connor) have engineered a great recovery after their shocking 12 points defeat against Young Grattans in the opening round.

That was a serious setback to their title hopes but subsequent wins over Killashee, Kenagh and Rathcline got revitalised Ballymore directly through to the semi-finals.

Leading the charge for possible championship glory is powerful midfielder Bernard McElvaney and the former Longford player, unquestionably the biggest threat to Ardagh/Moydow, will take some stopping.

Mattie Gorman and Damien Monaghan are the other main men on the Ballymore team and they will be quietly confident of qualifying for the county final on Sunday September 23.

Ardagh/Moydow have been depending a lot on lethal corner-forward Daryl Carrigy who was considered good enough to be selected for the county senior squad this season.

Carrigy, using his quick pace to excellent effect, tormented the Connolly’s and Killashee defences in the previous two rounds but he was stretchered off in the final minute of the match against St Brigid’s after sustaining a knee injury.

Carrigy will be ruled out of the semi-final, which is a big blow for his team, but with other influential  players in first cousins Killian and Gerard Farrell the indications are that the better balanced Ardagh/Moydow side will make it through to the Intermediate title decider.