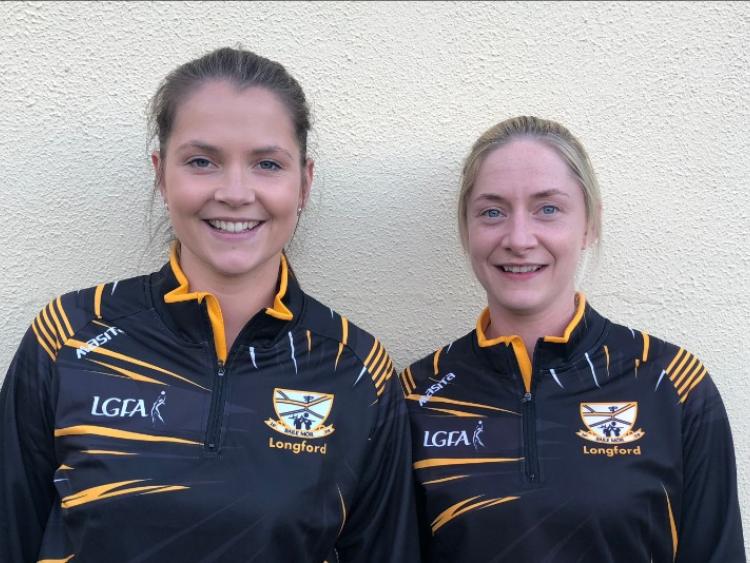 Deirdre Monaghan and Marie Martin, the joint captains of the Ballymore ladies football team who meet Longford Slashers in the County Intermediate Final at Glennon Brothers Pearse Park on Saturday.

In what is a first county final meeting between these two sides a place in the Senior Championship next year is at stake.

After reaching four out of five Junior Championship finals Slashers finally claimed the title last year that had eluded them. They also secured their place to play in Division 1 of the league this year too.

Slashers won five Minor A Championships in a row as well as the U-14 and U-16 Championships so they will be looking at players from these grades to help them claim the Intermediate title at Glennon Brothers Pearse Park on Saturday, throw-in 2pm.

Standing in Slashers way are Ballymore, a club that has been rebuilding since they were relegated from the senior grade in the recent past. They reached the Senior final in 2011 and 2014 but lost out to Killoe on both occasions.

Ballymore claimed the Intermediate title back in 2010 but a lot has changed for the club since then. They won  the U-16 ‘B’ Championship last year and are backboned by those players.

This year Ballymore qualified for the Division 2 League Final but were defeated by just a goal by a strong Dromard side. They also competed in the Gold Cup but claimed just one win; over Colmcille.

Their championship campaign began with a win over Slashers followed by a win over St. Helen’s which secured their place in the county final.

Captained by Marie Martin and Deirdre Monaghan, Ballymore may have a young side but it’s a talented one. Emer Heaney has been one of the best players for Longford in recent years but she is injured and looks set to miss the final which will be a big blow for Ballymore.

Sorcha Dawson captained Longford’s U-16s this year to Leinster ‘B’ Championship success alongside Nicole Neilon and the duo are talented young players who Slashers will have to watch out for in the final on Saturday.

Part of the Ballymore panel is the experienced Mary Kiernan who has been involved with the club for a large number of years and her experience in big games could help the younger players.

Slashers will be hoping to follow up on last year’s Junior success by claiming another championship title in the Intermediate grade.

Slashers are a well balanced side and are strong in most areas. Emer O’Brien, Claire Farrell and Aisling Cosgrove played for Longford this year and impressed. Grace Shannon and Orla Nevin are other players Slashers will look towards on Saturday. Jessica Barry is another player who can raise her game for the big occasions and Ballymore will want to keep a tight eye on Dessie Barry’s young daughter.

Both sides will hope their forwards are on form while the battle to gain the upper hand at midfield will be a key factor. Slashers may just have the edge in what promises to be a tight contest in the quest for Intermediate championship glory.