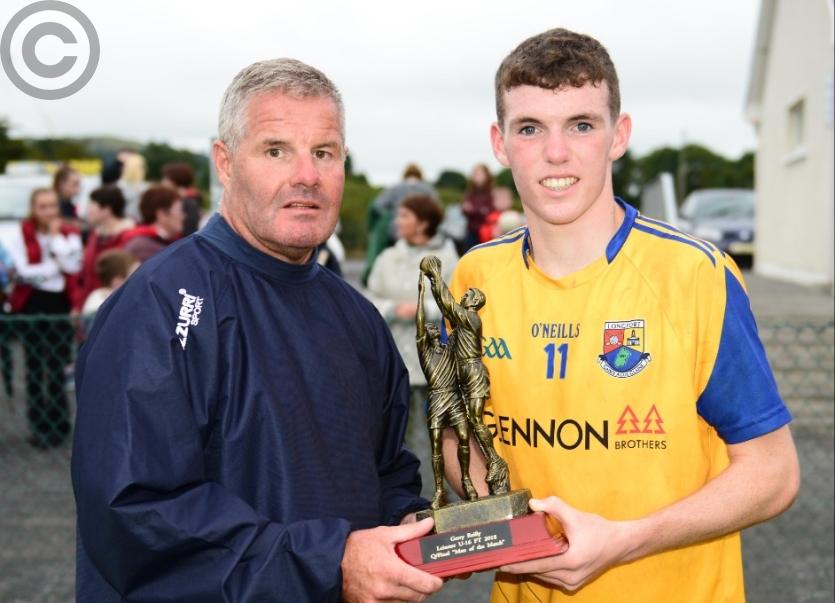 Martin Blake (Briody Bedding Limited-Tournament Sponsors) presenting the man of the match award to Kenagh's Keelan McGann following the Longford U-16's victory over Down in the Gerry Reilly Cup.

Longford staged a terrific comeback to beat Down in a dramatic finish to the quarter-final of the Gerry Reilly Cup Leinster U-16 Football Tournament at the Oldcastle GAA grounds on Saturday evening last.

Down were seemingly coasting to victory going into the last quarter of the match and were leading Longford by 0-13 to 0-6.  Longford had reduced the gap with points from Richard Prior and a Jack Duggan pointed free before Longford keeper Conor Skelly saved Jack Murtagh’s penalty.

This proved to be a significant turning point in raising the Longford spirit and they pushed on to fire over three scores in a row to close the gap to just two points.

Down looked to have weathered the storm with a point from John McGovern but gutsy Longford just refused to accept defeat and got back on level terms with a goal from Cathal Gilligan with full-time approaching.

Extra-time loomed but the momentum was firmly with Longford who hit the front with a point and a victory clinching goal from Jack Duggan who received a pass from man of the match Keelan McGann.

Down had led at the break by 0-7 to 0-5 and could have been much further ahead but for the Longford keeper Conor Skelly who produced some terrific saves.

Providing the opposition for Longford in the semi-final of the Gerry Reilly Cup at the Oldcastle grounds (the host club) this Saturday night (throw-in 8pm) will be neighbouring rivals Cavan who scored a comprehensive 6-15 to 1-17 win over Dublin in the quarter-final on Sunday evening last.