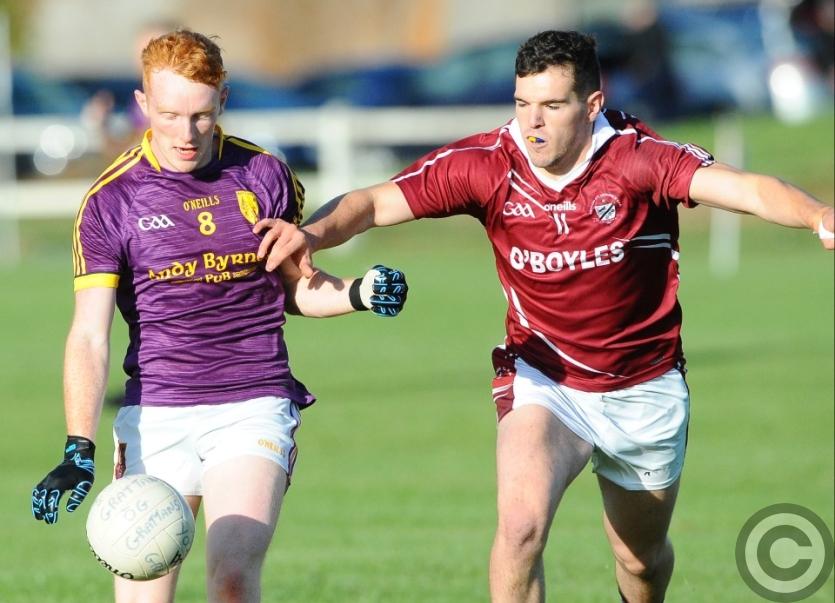 Stephen Farrell on the ball for Young Grattans in this tussle with Kenagh opponent Thomas McGann. Action from the IFC Group 1 game at Leo Casey Park, Ballymahon on Saturday evening. Pic:Declan Gilmore

A fantastic point from John Hand in the third minute of stoppage time clinched a dramatic win for Young Grattans over Kenagh in the Intermediate Football Championship Group 1 game at Leo Casey Park, Ballymahon on Saturday evening.

In an exciting finish to this game a free from Willie John McDermott in the 58th minute edged Grattans ahead but Kenagh’s Mick McCormack went down the field and fisted the ball over the bar to level matters. Shane Farrell then hit the post for Kenagh in the 60th minute.

Brendan Wallace’s free for Kenagh drifted wide in stoppage time before John Hand won the game for Grattans with an excellent score.

Credit to Grattans who never gave up. They were behind by three points in the 51st minute but a goal from substitute Kevin Jones brought them back into the game on the path to their eventual victory.