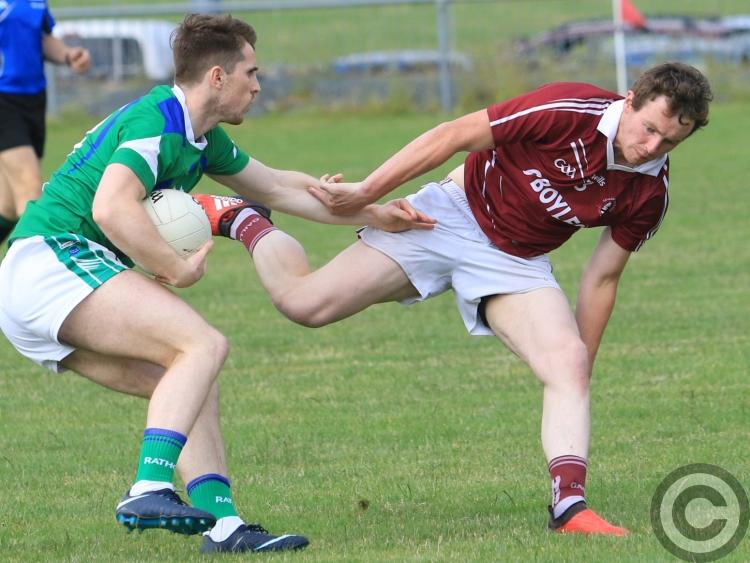 Liam Connerton on the ball for Rathcline in this tussle with Kenagh opponent Graham Forbes. Action from the IFC Group 1 game in Newtowncashel on Saturday evening last. Photo: Syl Healy

After leading by just a single point at the break, 1-8 to 1-7, Rathcline dominated the second half to emerge comprehensive winners over Kenagh in the Intermediate Football Championship Group 1 game at Pairc Chairan, Newtowncashel on Saturday evening last.

Rathcline got off to an explosive start and were unlucky not to score a goal in the opening minute when  Iarla O’Sullivan set up Cillian Flood who was denied by a Graham Forbes block.

Scores soon followed with Liam Connerton on target with two fine points and one from Cillian Flood. With Kenagh three points down they rallied to score a fine team point from Shane Doyle after great work from Karl Farrell.

Liam Connerton was back on the scoresheet again with two frees after Cillian Flood was fouled. This was following by another point from Connerton after a one two with Kevin Sorohan.

Mark Nolan and Alan Jones started to dominate the midfield area for Kenagh and win the majority of kick outs.  An Alan Jones mark set up Shane Doyle who slotted over from play.

Rathcline found the net in the 20th minute when Iarla O’Sullivan was on target and who was set up nicely by a strong Shane Kenny run cutting open the Kenagh defence.

Kenagh responded with a super individual score from Shane Farrell, a Shane Doyle strike and a Thomas McGann free but Michael Morrissey hit back with a score for Rathcline after great play from Shane Donoghue and Iarla O’Sullivan.

Kenagh’s goal came in the 29th minute. Alan Jones fielded and passed off to a motoring Shane Farrell who linked up with Shane Doyle who passed to Thomas McGann who stuck the ball in the roof of the net.

Rathcline had a goal chance just before the half-time whistle following a great run by David Rooney whose shot went narrowly wide of the post.

The second half saw the introduction of a very pacey Oran Kenny for Rathcline. While older brother Shane got the first score of the second half, Oran wasn’t long getting his name on the scoresheet with a fine point after a great run by Shane Donoghue.

Cronan Flood added another score before Liam Connerton struck for  two goals in less than a minute. The first was set up by the Kenny Brothers and the second by Shane Donoghue.

Brendan Wallace added a free for Kenagh which was quickly cancelled out by a point from Iarla O’Sullivan.

Then it was Oran Kenny’s turn to find the net. A short Kenagh kick-out was intercepted  by Kenny who made no mistake to score the fourth goal for Rathcline.

Ian Farrell replied with a point from play for Kenagh, followed by a Thomas McGann free.

Kenagh were dealt a further blow went Oran Kenny sent in a high ball into Shane Kenny who was fouled, resulting in a penalty which was converted by Liam Connerton.

Sean Canavan replied with a point for Kenagh and then Oran Kenny landed a point for Rathcline who ran out emphatic winners in the finish.