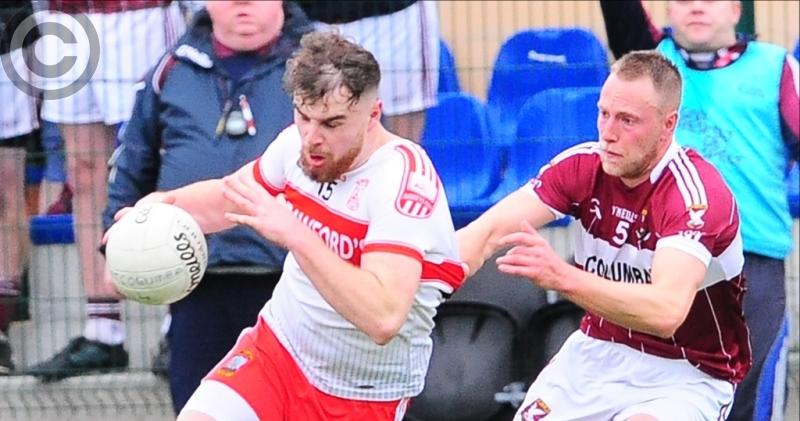 Conor Berry on the ball for Abbeylara in his bid to evade the challenge of Mullinalaghta defender Conan Brady. Action from last year's SFC final. Photo: Declan Gilmore

On the evidence of what St Columba’s have achieved for the past couple of years, few GAA supporters around the county can argue with the fact that Mullinalaghta are in pole position in the race for the 2018 senior football championship title.

The action starts on Friday evening as the Mullinalaghta three-in-a-row mission begins with an interesting first round showdown against neighbouring rivals Colmcille at Maguire Park,  Ballinalee (throw-in 8pm) while also down for decision is the meeting of Mostrim and Ballymahon at Moran Park, Carrickedmond (8pm).

Then on Saturday evening there is a double header at Leo Casey Park, Ballymahon and first up is the clash of Carrickedmond and St Mary’s Granard (6pm).

Abbeylara and Clonguish will battle it out in the second game on the programme (7.30pm) with an intriguing contest in prospect.

The highlight of the first round action is unquestionably the clash of Dromard and Longford Slashers at Allen Park, Newtownforbes on Sunday evening (7.30pm).

A winning start is probably a must for both these clubs with Killoe Emmet Og (who do not play this weekend) also pitted in the Group 3 minefield.

It is a packed Longford GAA schedule this weekend as four games in the Mulleady Group Intermediate Football Championship are also listed with a couple of crucial first round games in the very tough Group 2.

With Andrew Farrell leading the charge, Cashel confront St Patrick’s Ardagh/Moydow Harpers at McGann Park, Kenagh (3pm) on Sunday in a game that could go either way.

Fr Manning Gaels (relegated from the Senior grade last season) will be hoping for a positive result against Sean Connolly’s at Allen Park, Newtownforbes (6pm) on Sunday in the curtain-raiser to the Dromard v Slashers senior fixture.

Second round games in Group 1 of the Hennessy Cup are also scheduled with Kenagh (after receiving a bye in the opening round) starting their championship campaign against Rathcline at Pairc Chiaran, Newtowncashel (7pm) on Saturday.

Then on Sunday St Brigid’s Killashee will take on Young Grattans at McGann Park, Kenagh (1.30pm). Adding extra spice to this appetising local derby is the Tony McKiernan factor as the Killashee clubman and former St Brigid’s coach is now the manager of Grattans.

See this week’s Longford Leader for the reports on Grattans great win over Ballymore in the opening round along with Rathcline’s commanding victory over Killashee.