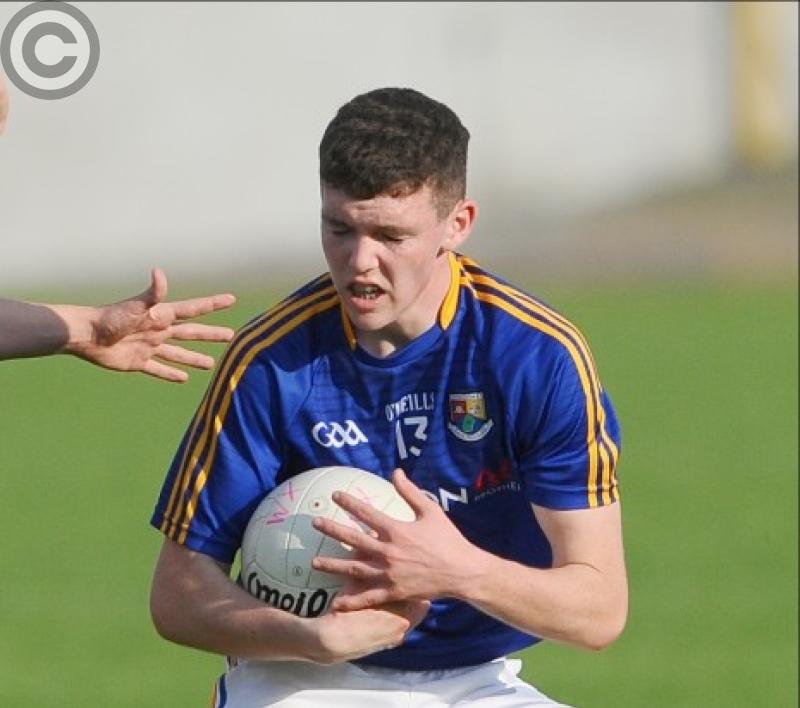 Kenagh's Keelin McGann pictured in action for the Longford U-17s.

A goal from Darragh O’Connell with 51 minutes gone on the clock proved to be the decisive matchwinning score as the Longford U-17s overcame Carlow to remain in contention for a place in the semi-finals of the Leinster Minor Football Championship.

O’Connell kept his composure to lob the ball over the advancing Carlow keeper into the back of the empty net at a crucial stage of the Group 2 clash at Netwatch Cullen Park on Wednesday evening with the sides deadlocked at seven points apiece.

That gave Longford some breathing space in a tight contest, after they trailed by 0-5 to 0-3 at the break, and ended up winning by four points to set up a massive match in the remaining group fixture against already qualified Kildare at Glennon Brothers Pearse Park on Tuesday evening next, July 3, throw-in 7.30pm.

Another win will clinch a last four spot in the provincial championship but Ger Carberry’s charges are facing a serious test against a strong Kildare side who have cruised through their other three games in the group stage and hammered the previously unbeaten Laois by 5-10 to 1-6 on Wednesday evening.

The Kildare U-17 manager is none other than former Newtowncashel and Longford footballer Padraig Carberry who guided the U-16 lilywhites to Fr Manning Cup glory last year.

A big blow for Longford is the absence of the injured Jordan Martin, who was ruled out of the match against Carlow after scoring 1-5 against Wexford in the previous round of the U-17 competition.