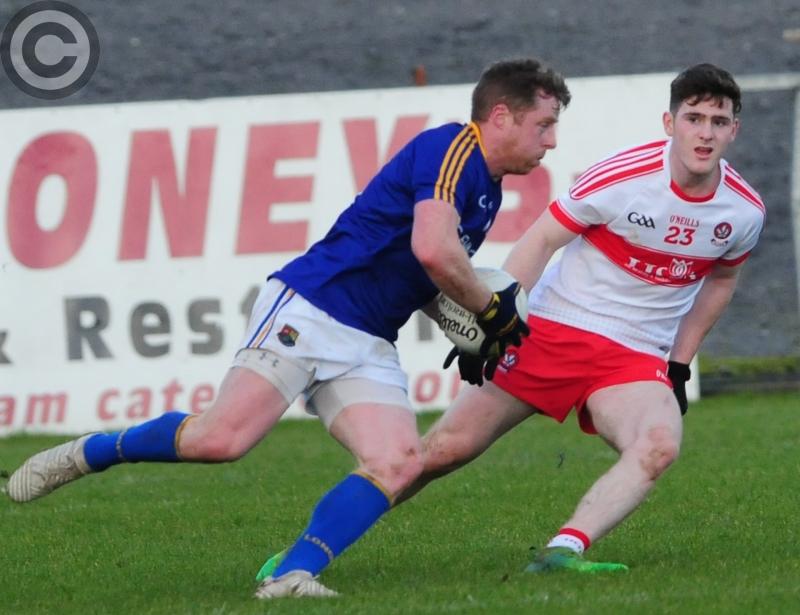 Sean McCormack on the attack for Longford against Derry in the NFL Division 3 game at Pearse Park back at the beginning of February. Photo: Declan Gilmore

In the build-up to the Leinster Senior Football Championship quarter-final against Meath at Glennon Brothers Pearse on Sunday week (May 27), there is some good news for Longford as long term casualty Sean McCormack was back in action against Cork in a challenge game on Tuesday night last, one of the substitutes introduced in the six or seven points defeat for Denis Connerton’s side.

Experienced forward McCormack may feature at some stage against Meath but the probable absence of the versatile Barry McKeon (hamstring) is a significant setback. Pauric Gill is also on the injured list and considered extremely doubtful while definitely ruled out is Andrew Farrell (knee) along with Clonguish defender Ronan Sweeney (broken ankle).

On the challenge game circuit, the County had a useful workout against a strong Kildare outfit in Newbridge last week and while they led by 2-6 to 0-8 at the break with Dessie Reynolds and Robbie Smyth scoring the goals, Longford eventually lost by two points, 2-15 to 2-13.

For the first time since 1995, Longford and Meath will meet in the Leinster Senior Football Championship and the winners will advance to a semi-final showdown against three-in-a-row All-Ireland champions Dublin or Wicklow at Croke Park on Sunday 10 June.

Tickets are currently on sale for the eagerly awaited Longford v Meath game and can be purchased at the Pearse Park office. Family tickets are available while the general admission prices are as follows: Stand - Adult €20, Children €5. Terrace - Adult €15, Children €5. Concessions for OAP’s, Students and Group Passes.

“Enough of the stand will be open to facilitate the attendance and a lot of work has gone into the redevelopment at the grounds to stage the Leinster Senior Championship match against Meath,” stated Reilly who is confident that the ongoing stand renovation will meet the health and safety requirements.