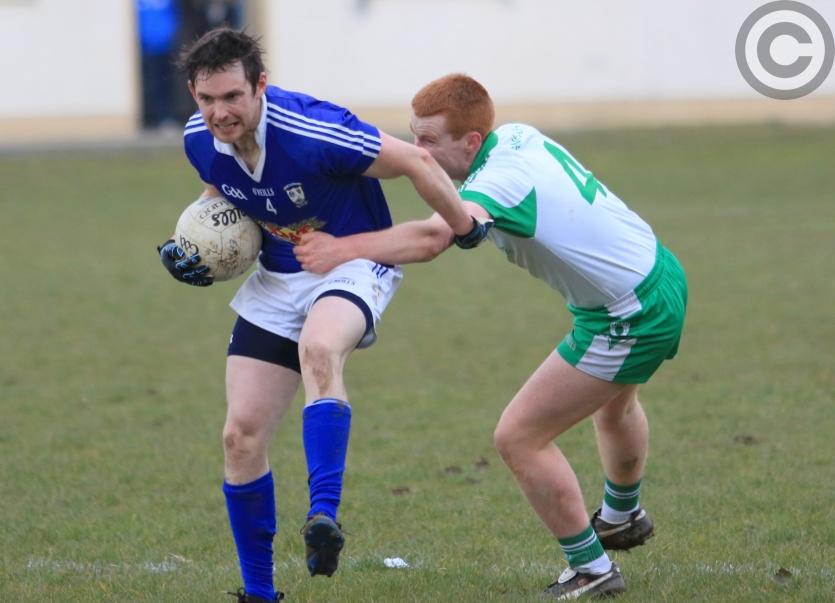 Paddy McGivney on the ball for Granard in this tussle with Killoe opponent Shane Clarke. Action from the Division 1 league game at the Higginstown grounds. Photo: Syl Healy

A well struck goal from midfielder Ronan McGoldrick midway through the second half proved to be the decisive score as Emmet Og eventually got the better of a gritty Granard side at the Higginstown grounds on Saturday evening.

While Killoe (with former Roscommon boss Fergal O'Donnell back in charge) had the comfortable margin of six points to spare in the finish in making a fairly positive start to the new season in Division 1 of the All County Football League they were made work hard for their expected win over St Mary’s.

The new Granard manager is Aidan Lennon, the goalkeeper on the Westmeath minor football team that won the All-Ireland title in 1995, and he will be pleased with this spirited display despite the defeat.

Thanks to a goal from Derek Sheridan in the 8th minute it was St Mary’s who ended up leading by 1-5 to 0-6 at the break but the determined home side suffered a significant setback when county midfielder Darren Gallagher was forced to retire injured with 22 minutes gone on the clock.