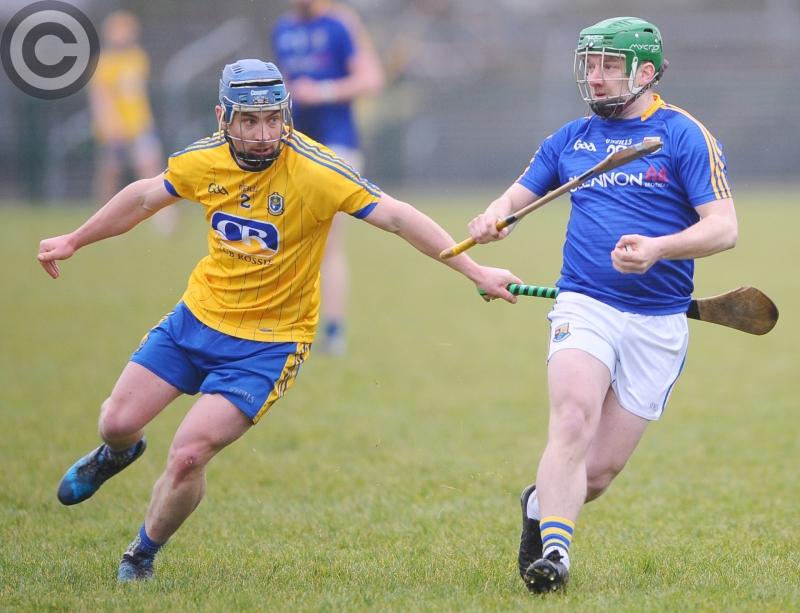 Shane O'Brien pictured in action for the Longford hurlers against Roscommon in the National League Division 3A game at Hyde Park on Sunday last. Photo: Declan Gilmore

Although just three points behind at the break, Longford eventually found the going very tough against Roscommon as they suffered their third defeat in Division 3A of the National Hurling League.

Roscommon were operating in the Christy Ring Cup for the past two seasons, playing at a higher level, and are considered the prime contenders for promotion to Division 2B in the league.

Longford, who were dealt a significant blow when centre-half-back Bart Hanley was forced to retire injured with just 13 minutes gone in the first half, kept with Roscommon for as long as they could at Hyde Park on Sunday last but the home side pulled away in the final 15 minutes. They were sharper and used the ball better with Daniel Glynn their main man in clocking up the most impressive total of 14 points.

Longford are pointless at the bottom of  the table and their remaining two games are at home to Louth and Tyrone in the fierce battle to avoid relegation.

Injury ruled out key player Joe O’Brien against Roscommon but he is expected to be back for the crunch clash against Louth at Pearse Park on Sunday next.

Roscommon opened the scoring inside the first minute with a goal from Eamon Flanagan and Daniel Glynn then hit over his first point before midfielder Daniel Connell got the opening score for Longford.  Points were traded between Jason Kilkenny and Cathal Mullane (‘65) before a nice point from Kerrill Hardiman restored Roscommon’s four point advantage in the 14th minute.

Longford were right back in the game one minute later thanks to the perseverance of Mullane who found the back of the net.

A save from Roscommon keeper Joe Keane in the 17th minute saw Longford awarded a ‘65 which Mullane duly pointed to leave the sides all square.

Roscommon then fired over three points in quick succession before Longford substitute PJ Masterson (replacing the injured Bart Hanley) landed a nice point. Eamon Flanagan and Robbie Fallon then got nice scores for Roscommon but three points from the excellent Cathal Mullane (one free) closed the gap to the minimum of margins by the 33rd minute.

Longford keeper Conor Gallagher pulled off a good save to deny Flanagan in the 34th minute while Daniel Glynn converted a ‘65 and a free to leave Roscommon leading by 1-10 to 1-7 at the break.

Karl Murray and Cathal Mullane (free) hit over points in the early stages of the second half but back came Roscommon with some crucial scores to put four between the sides by the 48th minute.

Roscommon then took over completely to shoot six more points in a row to extend the commanding lead to 12 by the 59th minute.

Longford’s last score of the game came in the 61st minute when Cathal Mullane converted a free but Roscommon finished strongly as Daniel Glynn hit over three points in the final minutes (two frees, one ‘65) with wing back Shane Curley also on target to leave the wide margin of 15 points separating the sides in the finish.