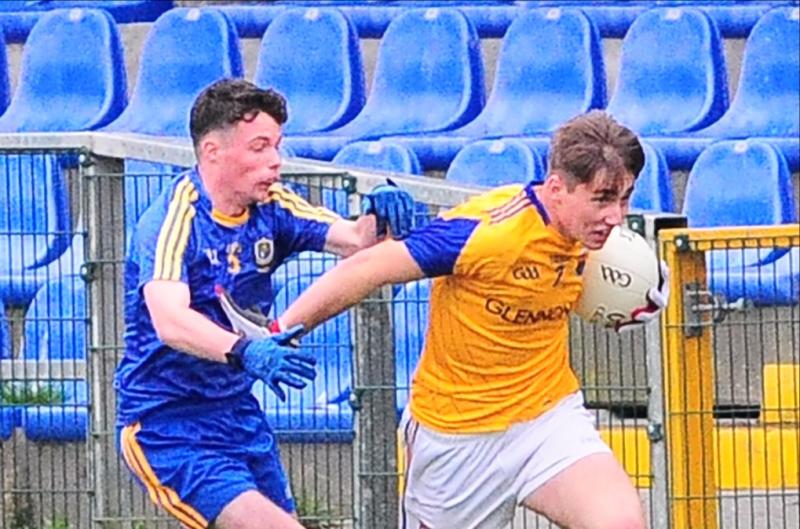 Eoghan McCormack on the ball for Longford against Roscommon in the Fr Manning Cup U-16 Football Tournament Group 2 game at Glennon Brothers Pearse Park on Saturday last. Photo: Declan Gilmore

After appearing to be heading for a heavy defeat when they trailed by twelve points at the break (3-7 to 0-4), the Longford U-16 footballers staged a determined second half comeback in their eventual gallant defeat by Roscommon in the Fr Manning Cup game at Glennon Brothers Pearse Park on Saturday last.

Managed by Fr Manning Gaels clubman Niall Mulleady, Longford showed a lot of character to register the impressive total of 2-11 on the changeover with Keelan McGann (direct from a free) and Cian O’Nuallain scoring the goals in the closing stages of the match (57th and 58th minutes) to give Roscommon a real scare.

With the unlimited substitutes rule applied in this tournament, a total of sixteen changes were made during the course of the second half (eight apiece). The fact that Longford succeeded in closing the gap to just five points in the finish will boost the confidence for the remaining Group 2 fixture against Meath on the 3G pitch at St Loman’s GAA Club grounds, Mullingar this Wednesday night (November 1), throw-in 8pm.

As Roscommon beat Meath in the opening round, they are now through to the Fr Manning Cup semi-finals and looked particularly impressive in the first half with Longford restricted to just four points - all of which came from frees converted by Reece Leonard.

Roscommon corner-forwards Liam Ormsby (2-1) and James Fitzpatrick (0-5) inflicted most of the damage in the first half while their other goal was the result of an excellent move that ended up with defender Daniel Farrell driving a cracking shot to the back of the net.

Longford, who sorely missed the injured Cian Dooner (Killoe), were struggling in a lot of positions but they produced a much improved performance in the second half with a point apiece from Cian O Nuallainn, Reece Reilly and Euan Finneran in quick succession giving  a glimmer of hope.

Roscommon then struck a significant blow with a fourth goal from a penalty converted by Liam Ormsby in the 37th minute but Longford, to their credit, came storming back to fire over four points in a row through Reece Leonard (two frees), Euan Finneran (an excellent long range effort) and Keelan McGann (free).

A decisive fifth Roscommon goal materialised in the 45th minute when James Fitzpatrick shot to the net to leave the visitors in a comfortable 5-7 to 0-11 lead but Longford held the upper hand for the remainder of the match in adding a further 2-4 to their emphatic tally that would have been good enough to win most games.

As already mentioned Keelan McGann and Cian O Nuallain got the late goals while the points were registered by Reece Reilly, McGann (when a goal was there for the taking), Reece Leonard (free) and half-time substitute Jordan Martin.

Charlie Carthy (free), James Fitzpatrick (free) and replacements Shane O’Neill and Richard Walsh (free) replied for Roscommon to keep the scoreboard ticking over in their favour.