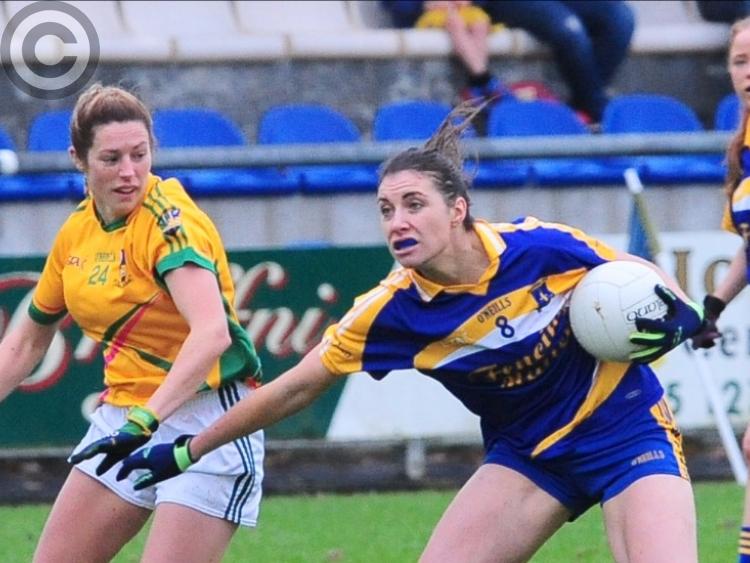 A strong first half performance set Meath side Clann na nGael (Athboy/Rathcairn) on their way to victory over the Dromard ladies in the Leinster Club Junior Championship semi-final at the Dromard grounds on Saturday last.

Dromard were unable to contain the stronger Clann na nGael outfit in the first half as they opened up the Longford Intermediate champions defence on a number of occasions. Credit to the home side for making a game of it in the second half but the fightback was too late.

Although Clann na nGael were the better side throughout, Dromard were on the receiving end of some rather baffling decisions by referee Jason Corcoran. He awarded a penalty against them in the first half for no apparent reason and disallowed a perfect Dromard goal in the second half.

It was Rebecca Maguire who opened the scoring; kicking over a fine point in the 2nd minute. Louise O’Connor then brought a fine save out of Dromard keeper Michelle Kilkenny three minutes later before Orla McLoughlin fired over the Meath side’s opening point.

Maguire was on target again for Dromard in the 9th minute but that was to be their final score of the first half as the Meath side took control. O’Connor was thwarted again by an excellent Kilkenny save in the 11th minute but one minute later Vivienne McCormack lobbed the ball over the Dromard netminder for Clann’s first goal. They had a number of chances to add to their score but kicked some poor wides.

Orlagh Lally kicked over a point before Michelle Kilkenny pulled off another fine save to deny Louise O’Connor for a third time in the 16th minute. Four points in a row extended Clann’s lead to seven by the 25th minute.

There was 10 between the sides in the 29th minute when Clann na nGael were awarded a penalty and it was a harsh call on Dromard. O’Connor beat Kilkenny this time. In stoppage time the visitors added another point to their tally from a dubious free which left Dromard trailing by 2-7 to 0-2 at the break.

Clann na nGael did not let up with the scoring in the opening exchanges of the second half and were 14 points ahead by the 40th minute.

After going 32 minutes without a score Dromard got their third point in the 41st minute through Rebecca Maguire but the Meath girls replied with three unanswered points.

The Dromard forwards began to see more of the ball as the second half progressed and in the 46th minute Maguire was fouled for a penalty with Michelle McManus putting the kick into the back of the net. Minutes later they had a goal disallowed for a supposed infringement after the Clann na nGael keeper had lost possession.

Dromard substitute Chloe Connell kicked over a point in the 52nd minute and soon after Doireann Mimnagh was fouled for a penalty with Michelle McManus making no mistake to score the second goal. Dromard also had other chances to get scores but kicked a number of poor wides.

Clann na nGael ended the game with two further scores in stoppage time to win by the comprehensive margin of 11 points in the finish.