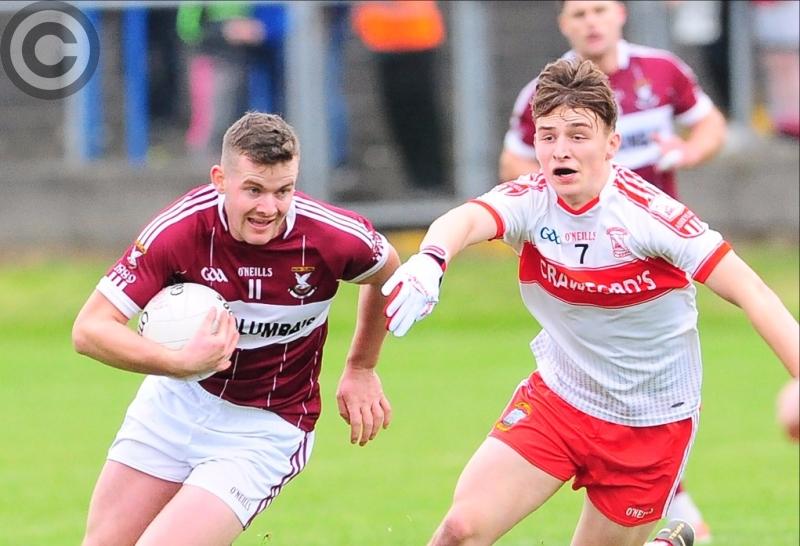 James McGivney on the ball for Mullinalaghta in breaking away from Abbeylara defender PJ Masterson. Action from the Senior Football Championship Final on Sunday last. Photo: Declan Gilmore

Powered by the towering figure of the physically strong John Keegan at centrefield; the excellent Donal McElligott in the heart of the defence and the always dangerous Rian Brady in attack, there was no stopping Mullinalaghta on their way to retaining the coveted Connolly Cup.

For the second year in succession just three points separated the neighbouring rivals in the finish but St Columba’s were a lot more superior than the final scoreline would appear to suggest and should have beaten Abbeylara with considerable more comfort.

Guilty of squandering several chances during the course of a generally scrappy senior football championship final played in perfect dry conditions in front of the official attendance of 4,215 at Glennon Brothers Pearse Park on Sunday last, Mullinalaghta St Columba's almost pressed the self destruct button but they had enough left in the tank to get across the line.

After falling 0-4 to 0-0 behind in the early stages of the game, Abbeylara showed a lot of bottle and no shortage of intensity as they battled their way back into contention and ended up only two points adrift at the break, 0-5 to 0-3.

The reigning champions looked to have pulled away when a strong start to the second half yielded four points (all terrific efforts) through Donal McElligott, Conan Brady, James McGivney (another to play a prominent part in the latest Mullinalaghta triumph) and Rian Brady to lead by 0-9 to 0-4 and the best Abbeylara could do was a solitary score from a Jason Kelly free.

But the beaten finalists for the previous two years were thrown a lifeline when they were awarded a dubious penalty after referee Aidan Dowler decided that Mullinalaghta defender Simon Cadam had fouled Conor Berry in the square and a badly needed goal resulted from the kick taken by Robbie Smyth in the 40th minute.

That was a huge lift for Abbeylara who actually got back on level terms (1-6 to 0-9) thanks to a couple of points from frees fired over by Robbie Smyth but St Columba’s kept their composure and regained the upper hand in going on to clinch back-to-back SFC titles.

Four points in a row through Rian Brady (winner of the man of the match award), Jayson Matthews (free), David McGivney (free) and James McGivney (set up by Donal McElligott) between the 48th and 58th minutes made sure that the Connolly Cup was heading back to Mullinalaghta and they were unquestionably the best team.

In between that dominant spell enjoyed by the undisputed kings of Longford football, Robbie Smyth missed a costly free for Abbeylara when they were two points down and he was unable to make his usual major influence in a repeat of last year’s senior final.

The dangerman Smyth was very tightly marked by a resolute St Columba’s defence who were inspired by the driving force of Donal McElligott and the fact that Abbeylara only managed a couple of scores from play was clearly not good enough in their bid to win the county title.

Mullinalaghta were reduced to 14 players when Jayson Matthews was sent-off after receiving a second yellow card in the 60th minute but there was no way back for Abbeylara who grabbed a consolation score in stoppage time when Robbie Smyth converted another free.

The chance of engineering a dramatic last gasp equalising goal was then lost when a misdirected Colm P Smyth free ended up going wide but Abbeylara can make no excuses for the bitter disappointment of defeat in the county final for the third year in a row.

St Columba’s contained the greater quality and enjoyed the much larger share of possession to win consecutive titles, a magnificent achievement.

Mickey Graham's talented team can now look forward with some confidence to the Leinster Club SFC with a favourable draw against the eventual Carlow champions (Eire Og or Rathvilly) at Glennon Brothers Pearse Park on Sunday 29 October.

Boosted by a brilliant start which saw them storm into a 0-4 to 0-0 lead with just eight minutes gone in the county final, St Columba’s were generally in control but had to be content with a slender two points advantage at the break after kicking a total of six wides in the first half as compared to just one for Abbeylara.

A brace of well struck scores from livewire corner-forward Rian Brady (a real class act)  in the opening minute set the trend for the eventual outcome and Conor McElligott also landed a couple of fine scores before Abbeylara opened their account in the 10th minute from a free converted by Robbie Smyth.

Just three more points materialised during the remainder of a tough tackling first half that produced a total of six yellow cards with Barry Smyth and James McEntire (the latter landing a brilliant long range strike) on target for Abbeylara while David McGivney (free) replied for Mullinalaghta.

St Columba’s stepped up another couple of gears in the second half to eventually emerge victorious and but for the penalty goal they conceded in what appeared to be a harsh decision they would have registered a more emphatic victory.

It was a fourth Senior Championship success for the Mullinalaghta club in their proud history, which was  richly deserved, and having also won the Division 1 league this season another Leader Cup triumph will complete the grand slam of senior titles  for St Columba's.