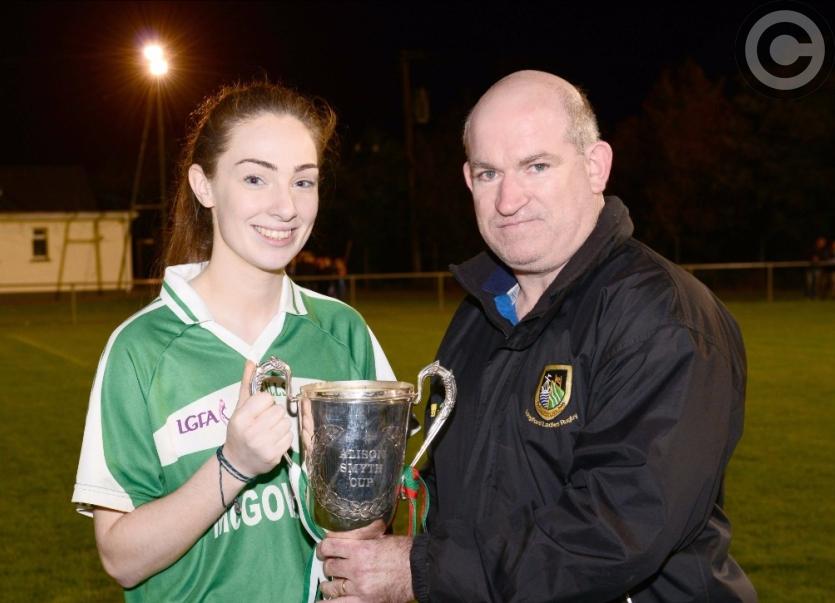 Clonguish gradually got their act together to emerge victorious in the Ladies Football  Senior Championship final replay against luckless Mostrim at the Monaduff grounds, Drumlish on Monday night last.

It was Mostrim’s second county senior final defeat in a row but this one will hurt more because for long spells in this game they were the better side but their decision making and poor shot selection cost them dearly in the end.

Credit to Clonguish who found themselves down by four points at one stage and cut the gap to two going in at the break, 0-4 to 0-2.

Six minutes into the second half they had drawn level and they never panicked throughout with their greater experience telling in the end. They finished the game with 13 players after Doireann McCarthy and Cliodhna Allen were sinbinned while Niamh Darcy had been sinbinned earlier in the second half.

Mostrim made a terrific start with Rachel Cheevers opening the scoring with a fine point. Ikeya Collins then tested Clonguish keeper Jessica Stewart in the 4th minute with the netminder pushing the shot over the bar for a point.

A neat point from Louise Monaghan was Mostrim’s third point of the game. Down the other end Clonguish tried to get a score but Mostrim keeper Lisa Keegan did very well to come out and deny them in the 8th minute.

Mostrim kicked a number of wides before the excellent Gemma Kenny landed a wonderful point in the 10th minute. Clonguish didn’t register their opening score until the 16th minute when Ailbhe McGowan set up player of the match award winner Oonagh Shanley for a point.

A nice score from the hard working Niamh Darcy cut the deficit to two in the 24th minute. Mostrim created chances but yet again shot wides which they were going to rue as the replay progressed.

Aoife Darcy kicked over a fine free from a tight angle to bring Clonguish to within one of Mostrim in the 34th minute and minutes later Aisling Greene registered the equalising point.

After going 31 minutes without a score Michelle Burke converted a free for Mostrim in the 41st minute to edge her side ahead by a point. The lead didn’t last long with Oonagh Shanley kicking over a fine point to level matters and then a fantastic strike from Aisling Greene put Clonguish ahead for the first time in the 46th minute.

Minutes later Clonguish lost Niamh Darcy when she received a yellow card but despite this setback they got another point to leave two between the sides in the 52nd minute.

Another Michelle Burke free kept Mostrim in the game but they couldn’t get any more scores despite having the possession and creating the chances.

After coming back on from being sinbinned Niamh Darcy scored a wonderful point to restore her side’s two point advantage. Clonguish then lost Doireann McCarthy and Cliodhna Allen who were sinbinned before Aoife Darcy clinched a hard earned success with a point in stoppage time.

The triumphant Clonguish senior ladies are quickly back in action as they make the long trip down to Wexford to take on St Martin’s in the quarter-final of the Leinster Club Intermediate Championship this Saturday.

The Longford Intermediate champions Dromard are also in Leinster Club action this Saturday with home advantage against Tinahely (Wicklow) in the quarter-final of the provincial Junior championship. The throw-in at the Dromard grounds is 2pm.