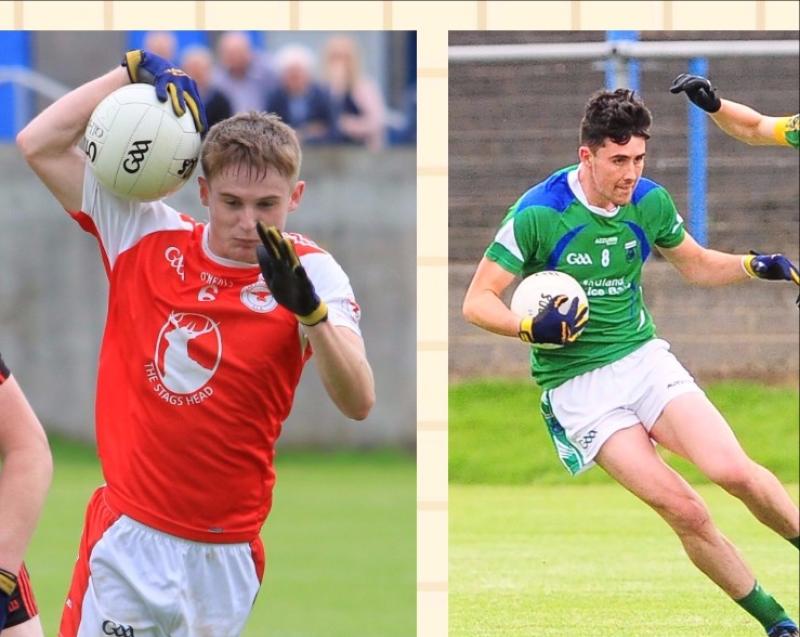 Dessie Reynolds (Sean Connolly's) and Shane Kenny (Rathcline) who will be in action in the Intermediate Football Championship Final at Glennon Brothers Pearse Park this Sunday.

In a first ever meeting between the clubs in the county Intermediate football championship final, Rathcline and Sean Connolly’s will battle it out for the Gerry Hennessy Cup at Glennon Brothers Pearse Park this Sunday, throw-in 4pm.

Runners-up in their respective groups in the league stage of the second tier championship, the Lanesboro lads and the Ballinalee boys have made it through to the title decider on merit and a most intriguing contest is in prospect.

Rathcline are recent winners of the Hennessy Cup after beating St Brigid’s Killashee 3-5 to 0-9 in the 2015 final and are bidding to capture the Intermediate crown for the fourth time having also triumphed in 1970 and 2005.

Sean Connolly’s, on the other hand, have been waiting a long time to make the breakthrough in this grade as they last won the Intermediate championship back in 1989.

The Ballinalee club will be hoping to bridge that 28 years gap on Sunday next and, like Rathcline, are also seeking a fourth success in this grade in their attempt to add to the other county title wins in 1982 and 1988.

Completing a two-in-a-row back then was a tremendous achievement and there is a strong belief that the current squad can cross the final hurdle under the guidance of manager Donal Ledwith, the former Abbeylara and Longford footballer.

Ledwith has instilled a determined spirit into the Connolly’s squad as they proved when coming from behind to draw with Cashel in the semi-final and the players showed fierce resilience to win the replay in a dramatic finish thanks to two goals in stoppage time.

This is Ledwith’s first year in charge but Connolly’s have gone close to winning the Intermediate title during the past few seasons and last reached the final in 2014, only to lose against Carrickedmond by a solitary point.

During that campaign they got the better of Rathcline by the narrow margin of two points in the semi-final but subsequently suffered the bitter disappointment of defeat at the penultimate stage of the championship against St Brigid’s Killashee (2015) and Cashel (2016) when they were outdone by late goals.

Getting back into the county final was the priority this year and with that target achieved the tough task of winning the title is now the next step.

Connolly’s main man is Dessie Reynolds, whether he features in defence or in attack, and he will be determined to make a big impact against Rathcline along with other key players in midfielder Stephen Lynch, defenders Ciaran MacEoin and Daire Duggan (who could also feature at midfield) and forwards Joe Heaney and Paddy McDonnell.

After experiencing a torrid time in their eventual relegation from the Senior Championship last year, Rathcline have gradually adapted back to life in the Intermediate grade and the return of some experienced players like Ronan Clyne has certainly strengthened their cause.

But the bad news for the Lanesboro outfit is the serious knee injury sustained by Liam Connerton, who was stretchered off in the 47th minute of the semi-final win over Ardagh/Moydow, and the county regular is ruled out of the title decider.

Connerton’s absence from the attack is unquestionably a massive blow. Having said that, Rathcline were just a point ahead when the unfortunate Liam was forced to retire but the other forwards then stepped up to make their mark with Ryan Fallon striking the killer blow to fire home a cracking goal in the 56th minute.

James Hanley and Iarla O’Sullivan were also to the fore in the fairly emphatic 3-12 to 0-13 success over the amalgamation but Aaron Madden is another injury concern for Rathcline manager Kevin Hanley.

Madden, who started in the full-forward-line in the semi-final, only lasted 19 minutes and it remains to be seen whether he is fit enough to feature against Connolly’s.

Midfield is probably the strongest sector on the Rathcline team and the promising Shane Kenny has the potential to play a leading role in the final and is capable of getting some vital scores as he proved with the 1-3 he registered against Ardagh/Moydow.

Alongside Kenny will be the physically strong Shane Casserly who will be hoping to make his presence felt while Shane Donohue is a commanding figure at centre-half-back who will be hard stopped if he clicks into top gear.

Connolly’s have been knocking at the door in recent years in their quest to collect the coveted Intermediate silverware and might just have the edge over Rathcline who will sorely miss the injured Liam Connerton.