Longford Intermediate Football Championship: Ardagh/Moydow take on Rathcline with place in the county final at stake 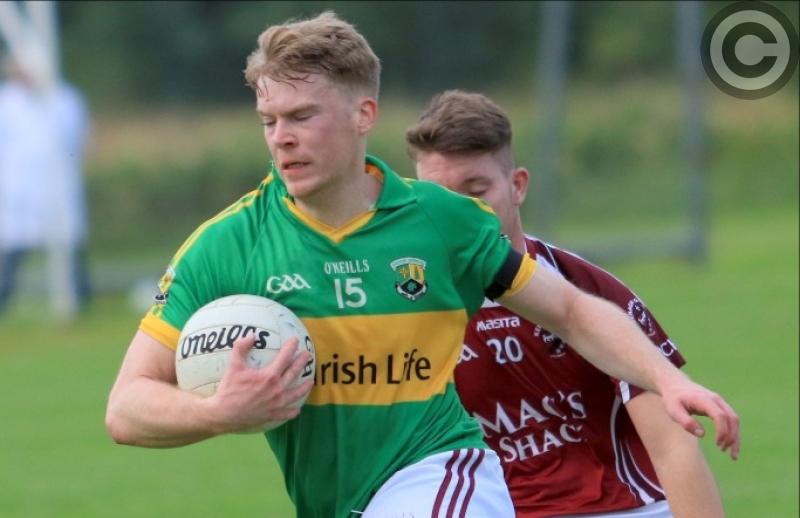 Finn Hartmann on the attack for Ardagh/Moydow ahead of Kenagh opponent Gary Kenny. Action from the opening round of the IFC at Leo Casey Park back in July. Photo: Syl Healy.

Rathcline are just one step away from appearing in the Intermediate Football Championship decider for the second time in the space of three years but could be hard pressed to get the better of the Ardagh St Patrick’s/Moydow Harpers amalgamation in the semi-final at Glennon Brothers Pearse Park this Saturday, throw-in 5pm.

While the general opinion is that the Lanesboro outfit were a stronger side when they captured the Gerry Hennessy Cup in 2015, they still made it through to the last four of the current championship campaign with considerable ease despite losing to Cashel in the opening round (1-12 to 0-11).

Subsequent wins over Young Grattans and Legan Sarsfields by a wide margin will have boosted the confidence and Rathcline will be depending on their key players, Shane Kenny and Liam Connerton, making a big impact in facing a far tougher task on this occasion.

Kenny will be difficult to contain at centrefield while county senior regular Connerton is the dangerman in attack and will be hard stopped if he receives a proper supply of the ball.

Touted by many as title contenders last year, Ardagh/Moydow failed to qualify from the group and struggled somewhat in their first two games in the championship this season.

The amalgamation were trailing against Kenagh at the break but the introduction of influential substitute Killian Farrell in the second half made a decisive difference. Farrell did not start due to a recurring injury but certainly made his mark when he was brought on, firing over five points in the 1-15 to 1-9 victory.

Ardagh/Moydow could only manage a draw against Ballymore in the next round but proceeded to produce their best performance so far in the remaining group fixture against the already qualified Sean Connolly’s, emerging victorious on a comprehensive 3-11 to 0-11 scoreline.

Daryl Carrigy has the potential to pose a serious threat in attack, along with a fully fit Killian Farrell, and while Ardagh/Moydow could well come out on top a hesitant vote goes to Rathcline to reach the county intermediate football final on Sunday September 24.