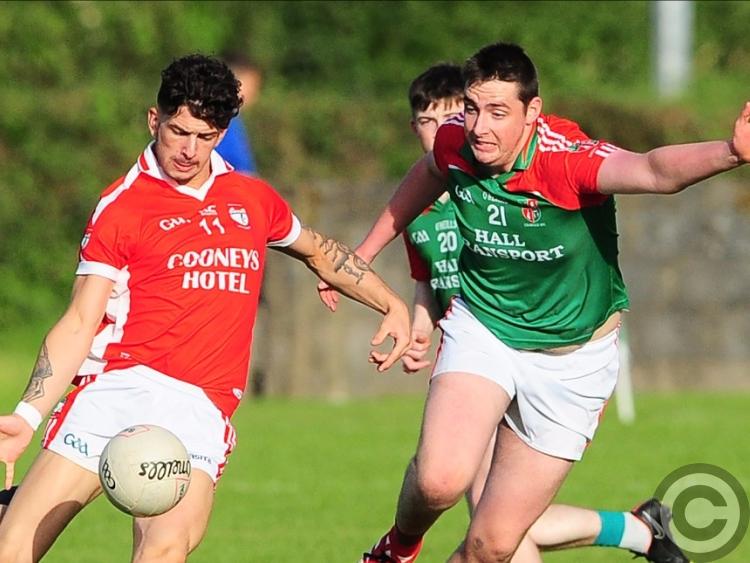 Joe Kelly pictured in action for Ballymahon, letting the ball away in evading the challenge of Colmcille opponent Fergal Sheridan in the recent SFC Group 3 game at Allen Park. Photo: Declan Gilmore

The other two quarter-finals are next on the agenda in the Senior Football Championship this weekend and fancied to advance a stage further in the battle for the Connolly Cup are Abbeylara and Mostrim.

After suffering the bitter disappointment of defeat in the county final for the past two years, Abbeylara are on a mission in the hope of going all the way this season and the draw for the knockout stages has worked out well for the north Longford club in that they avoided the other main contenders for the title.

Under the guidance of new manager Danny Brady from Mullahoran, the group stage of the championship did not pose many problems for Abbeylara who eventually got the better of both Carrickedmond and Mostrim in comfortable fashion to reach the last eight with a game to spare.

Even though they lost to Clonguish by the narrow margin of a point in the remaining fixture they still finished on top of Group 2 on scores difference and significantly ended up apart from Mullinalaghta, Killoe, Clonguish and Dromard in the draw for the quarter-finals.

While the general opinion is that Abbeylara now stand a strong chance of getting through to the senior championship decider for the third year in succession, they could be facing a tricky task against Colmcille who might be capable of springing a surprise at Glennon Brothers Pearse Park on Sunday evening next, throw-in 6.30pm.

Killoe clubman Stephen Coy is now in charge of Colmcille, who were the firm favourites to emerge from the ‘lesser’ Group 3 and succeeded in winning all four games against Fr Manning Gaels, Granard, Killashee and Ballymahon.

The Colmcille management team do not need to be told that there is still plenty of room for improvement with what is basically a young team but the club will see this as a decent chance of making it through to the county final for the first time since 2008 when they last won the title.

In action in the other quarter-final at Glennon Brothers Pearse Park on Saturday evening (throw-in 6.30pm) are Ballymahon and Mostrim and a place in the last four is a huge incentive for both clubs.

The only Division 2 team left in the 2017 senior championship and who are unbeaten in the league this season, Ballymahon carried that consistent form into the Connolly Cup campaign and have been rewarded with a quarter-final place.

Former Ardagh and Longford player Liam Keenan is their current manager and he has certainly got the best out of Ballymahon, who finished as runners-up in Group 3 on scores difference from Fr Manning Gaels after the sides ended up deadlocked on five points apiece in the table.

After drawing with the Gaels in the opening fixture, Ballymahon went on to score a great win over Mostrim before getting the better of St Brigid’s Killashee. Their only defeat came against Colmcille in the remaining group game when just two points separated the sides in the finish.

While Ballymahon will be quietly confident of reaching the semi-final, Mostrim are potentially the stronger side as they showed when causing an upset to conquer Clonguish in the opening round but subsequently lost to Abbeylara.

Survival in the championship all boiled down to the crunch clash against Carrickedmond in Group 2 and the absence of the unavailable Brian Farrell proved to be a big loss as they struggled for the result they required to make further progress.

A draw would have been good enough and the Edgeworthstown outfit were fortunate to come out on top by a solitary point. Manager Jack Lynn will be demanding a big improvement in the bid to beat Ballymahon and the indications are that Mostrim will be good enough to earn a semi-final showdown against Abbeylara or Colmcille.