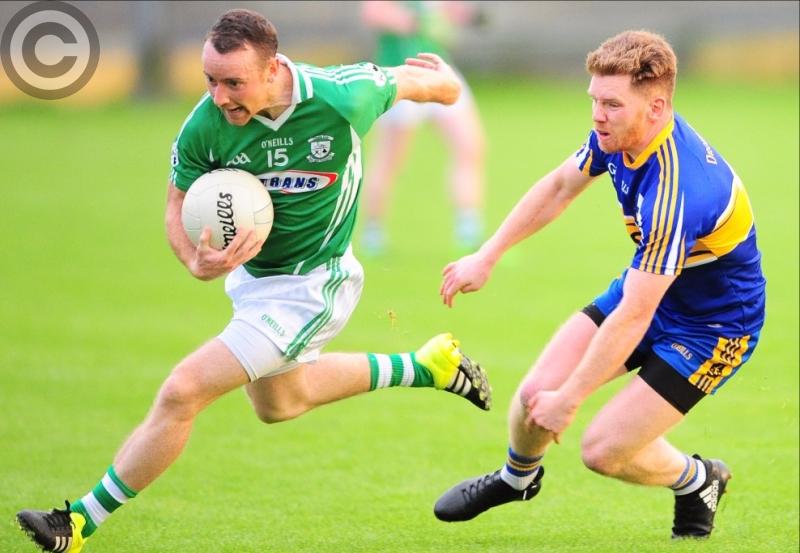 Ciaran Williams on the attack for Clonguish in breaking away from Dromard defender Paul McGee. Action from the SFC quarter-final on Sunday evening last. Photo: Declan Gilmore

A well-taken goal from Paul Barden midway through the second half proved to be the decisive score as Clonguish held out to defeat Dromard by the narrow margin of two points in the Senior Football Championship quarter-final at Glennon Brothers Pearse Park on Sunday evening last.

Dromard suffered a significant setback just before the break as defender Peter Masterson was sent-off after receiving a second yellow card in the 28th minute and it was always going to be a difficult task with 14 players for the entire second half.

Clonguish had established a comfortable 1-14 to 0-11 advantage when Ciaran Williams shot over the bar in the 52nd minute but they failed to register another score as Dromard gradually closed the gap with four points in a row - three from Francis McGee frees with Jamsie Martin on target with a wonderful strike (play).

And Dromard almost snatched a dramatic winning goal deep into stoppage time but McGee was unable to get the vital touch in a tussle with the Clonguish keeper Declan McKenna and Neil Devlin cleared the danger in the scramble.

While Clonguish can now look forward to a semi-final clash against Mullinalaghta or Killoe, the losers were furious with a few  decisions made by referee Michael Farrell that went against them and the Ballymahon official was the subject of considerable criticism from the vociferous Dromard supporters.

Even their manager Sean Hagan was embroiled in the heat of the championship battle as he was dismissed from the sideline in the 21st minute of the first half with the referee acting on the advice of the linesman.

The Barden brothers Paul and David made a major impact in the Clonguish victory as they tormented the opposing defence but it was Dromard who held a slender 0-9 to 0-8 lead at half-time.

Their scores were registered by Jamsie Martin (three frees), a brace apiece from Francis McGee and wing back John Sheridan (all fine efforts from play) while Ronan McEntire and Cian Mimnagh were also on target.

Joe O’Brien accounted for four of the Clonguish scores (three frees) in the first half with the other points coming from Paddy Dowd (two frees), David Barden and Paul Barden.

The 14 men of Dromard were outplayed in the third quarter as Clonguish got on top to build up a comfortable 1-13 to 0-10 advantage with the points coming from Chris Gordon, Joe O’Brien (three frees) and Paul Barden with the solitary reply a free converted by Francis McGee.

The Barden brothers linked up to create the opening for the goal in the 45th minute with David putting Paul through for the vital score.

And it could have been even worse for Dromard as Joe O’Brien had a point-blank shot well saved by opposing keeper Sean McNerney in the 41st minute.

Another pointed free followed from McGee as Dromard staged a determined comeback in the final quarter of the game but time ran out for the north Longford side in their exit from the 2017 senior championship.

Darren Quinn received a black card four minutes into stoppage time for a cynical foul on Francis McGee with his subsequent close range free blocked down as Dromard  tried to snatch a last gasp winning goal with the final kick of the game.