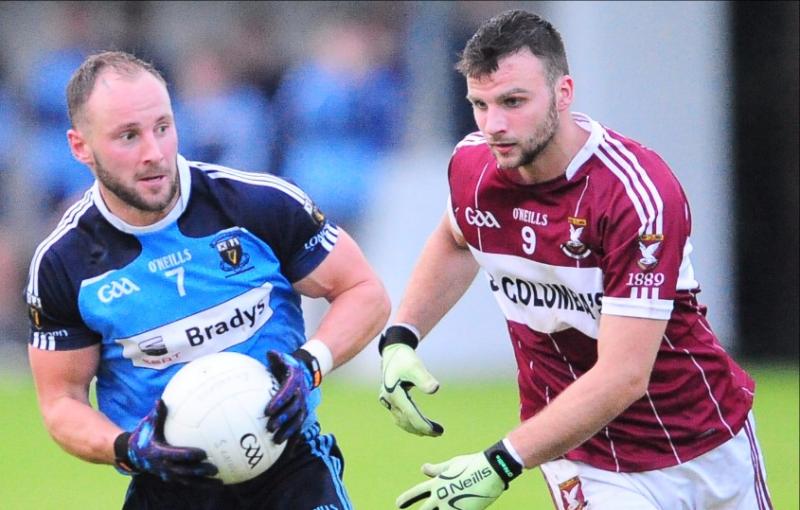 Peter Foy on the ball for Longford Slashers in breaking away from Mullinalaghta St Columba's opponent Aidan McElligott. Action from the Senior Football Championship first round clash. Pic: D Gilmore

Mullinalaghta sent out a stern warning to the challengers for their county crown that they will not relinquish the Connolly Cup without fierce resistance as Longford Slashers found out to their dismay at the Higginstown grounds in Granard on Saturday night last.

St Columba’s have quality all over the field with Donie McElligott terrific on this occasion in marshalling the defence and getting forward.

Longford Slashers did put it up to Mullinalaghta in spells during this game but the title holders never looked to be in trouble. In the first half Mullinalaghta conceded two goals but they responded like champions.

St Columba’s  raised the green flag twice in the second half; a Donie McElligott penalty and a goal straight after from Gary Rogers. There was 18 points between the two sides at that stage but Slashers battled back to kick over some late consolation scores.

From the throw-in Mullinalaghta got their opening score through David McGivney and  Slashers were dealt a blow minutes later when Tom Madden pulled up injured. Niall Mulligan got Slashers opening point before Gary Rogers and Colin Smith traded two fine points.

Slashers went ahead for the first and only time in the game in the 14th minute when Paul Kelly grabbed his first goal. Mullinalaghta replied with points from James McGivney, his brother David then converted two frees and Donie McElligott hit over a wonderful score  to put them back in front.

Three excellent points from David McGivney, Jayson Matthews and Aidan McElligott put four between the sides by the 23rd minute but Slashers were back in the game two minutes later when Paul Kelly scored his second goal. A fantastic point from Brian Walsh levelled the game in the 25th minute.

Once again Mullinalaghta hit back and four unanswered points saw them go in at the break 0-13 to 2-3 in front.

St Columba’s did not let up on the scoring in the second half. Points from Rian Brady, Ruairi McElligott and David McGivney (free) extended the lead to seven by the 37th minute while Slashers only reply was a pointed free from Colin Smith. Gary Rogers scored an excellent point in the 42nd minute before David McGivney kicked over another free.

Then in the space of a minute Mickey Graham’s side scored two goals. The first came from a penalty; corner back James Mooney showed great vision with a fine pass to Aidan McElligott and he was fouled in the square. Up stepped older brother Donie to convert the penalty and Gary Rogers scored a second goal moments later.

David McGivney fired over a free minutes later to stretch the lead to 15 points before Slashers got a point from Andrew Dalton and started to bring on substitutes late in the game.

Substitute Niall Kelly was lively when introduced and scored two points (one free) while Daniel Kirby converted a free but Slashers found the going too tough against the reigning champions.