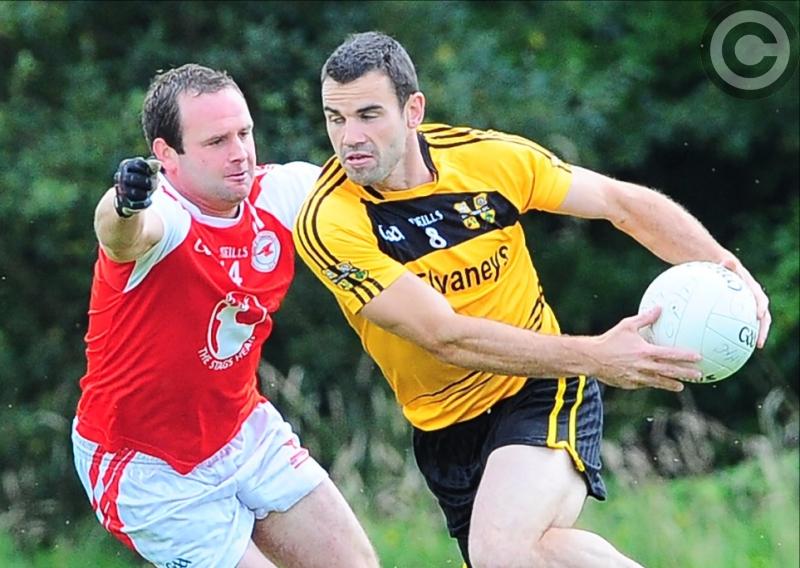 It was all too easy for Sean Connolly’s as they started their Intermediate Championship campaign with a comprehensive win over a disappointing Ballymore side at Devine Park in Edgeworthstown on Sunday last.

Both teams ended the game without their full complement of players; Connolly’s had John McKenna sent-off while Peter Walker and Mark Keogh were sent-off for Ballymore. They were all double yellow card offences and it wasn’t an overly physical game.

Connolly’s started the game brightly and kicked over three early points before Ballymore got their first score in the 7th minute; a free from Bernard McElvaney.

Stephen Lynch two points (one free), a fine Daire Duggan effort and a point from Eugene Murtagh put Connolly’s ahead by six by  the 16th minute. Ballymore’s only reply was a pointed free from Damien Monaghan.

A wonderful pass from Paddy McDonnell set John McKenna up for a point in the 19th minute and McDonnell was on target minutes later to put seven between the sides.

Ballymore struggled to gain possession but got a third point in the 22nd minute through Bernard McElvaney (free). Adrian Dalton and Sean Kenny replied for Connolly’s. Glen Kelly got a neat point for Ballymore but that was cancelled out by an Andy McNamee point.

In first half stoppage time Damien Monaghan kicked over a free to leave Ballymore trailing by seven at the break; 0-12 to 0-5. Two Monaghan frees cut the deficit to five in the early stages of the second half but that was as close they could get to Connolly’s.

A Stephen Lynch free was followed by excellent points from Dessie Reynolds and Adrian Dalton.

In the 45th minute they lost John McKenna when he got a second yellow card but it mattered little. Damien Monaghan kicked over a neat point for Ballymore in the 47th minute but Connolly’s then got a goal through Dalton.

Trevor Murtagh followed up with a point to put 11 between the sides and Ballymore’s Peter Walker received a second yellow card in the 57th minute.

Points were then traded between Daire Duggan and Damien Monaghan (free).

In the first minute of stoppage time Mark Keogh received a second yellow card to leave Ballymore with 13 players.

Right at the end Connolly’s grabbed a second goal in a move involving Paddy McDonnell and Daire Duggan that ended in Gregory Masterson finding the back of the net.