Longford Intermediate Football Championship: Ardagh/Moydow gradually get their act together to beat Kenagh 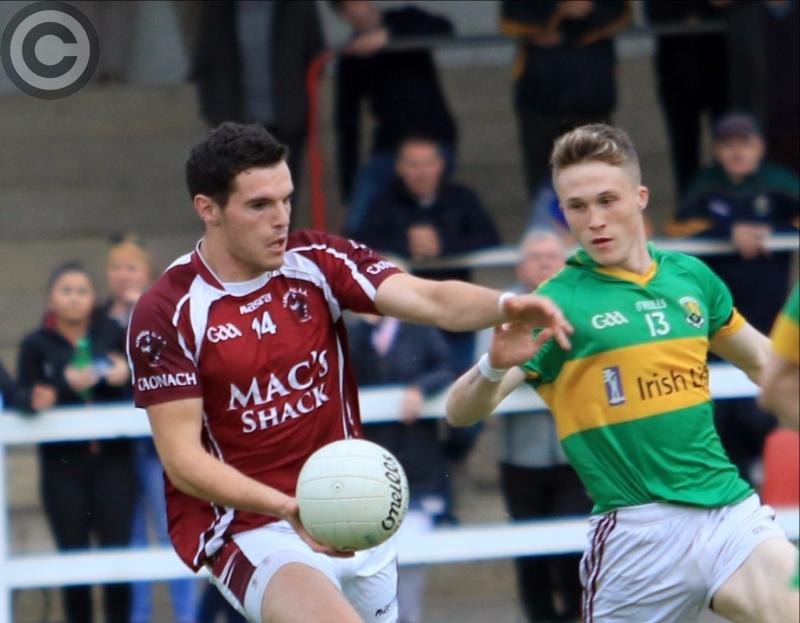 Thomas McGann on the ball for Kenagh in evading the challenge of Ardagh/Moydow opponent Aaron McTiernan. Action from the Intermediate Football Championship first round clash. Photo: Syl Healy

Poor for most of the first half and who ended up trailing by 1-5 to 0-5 at the break, Ardagh/Moydow gradually got their act together on the changeover to beat Kenagh in fairly comfortable fashion in the finish with the introduction of influential substitute Killian Farrell making a decisive difference.

A surprise win was a strong possibility in the opening round of the Intermediate Football Championship at Leo Casey Park in Ballymahon on Saturday night last when Lee Ross Gill fired home a cracking goal in the 19th minute to leave Kenagh leading by 1-4 to 0-2.

Showing a lot of pace in attack, with the points coming from Thomas McGann (free), Mark Nolan, the livewire Gill and Andrew Dalton, Kenagh were really putting it up to Ardagh/Moydow who were struggling for scores and all they could manage was a point apiece from Paddy Ganley (free) and Aaron McTiernan in the early stages of the game.

But things did improve for the amalgamation and after Ganley fisted the ball over the bar in the 23rd minute, a couple of further scores followed from Shane Henry and Finn Hartmann before Lee Ross Gill landed a very good point for Kenagh on the stroke of half-time.

Both sides were guilty of some bad finishing throughout the match and Ardagh/Moydow were four points behind when Mark Nolan landed a fine effort for the underdogs early on in the second half.

Back came the amalgamation with a point apiece from Paddy Ganley (free) and Gerard Farrell but another great score from Lee Ross Gill in the 43rd minute left Kenagh 1-7 to 0-7 ahead.

Another point from Gerard Farrell reduced the deficit and then Killian Farrell (unable to start due to a recurring injury) fired over three points (one free) in quick succession to put Ardagh/Moydow in front for the first time.

Kenagh then suffered a severe setback when Karl Farrell was sent-off after receiving a straight red card in the 49th minute and they fell further behind when Finn Hartmann and Shane Henry fired over excellent points for Ardagh/Moydow.

A point apiece (frees) were then exchanged between Thomas McGann and Killian Farrell before a well-taken goal from Ardagh/Moydow wing back John Shea in the 58th minute put the issue beyond all doubt.

Just before that killer blow was struck, Kenagh were reduced to 13 players when Andrew Dalton was booked for a foul and after showing dissent with the decision he was issued with an immediate second yellow card in getting sent-off by referee Jimmy McCormack.

Moments later Ardagh/Moydow full-back Niall Keenan was also dismissed for a second yellow card offence and after Killian Farrell fired over another free in stoppage time (his fifth point) a brief fracas broke out at the end of the game as tempers boiled over in Ballymahon, leaving a lot of ill feeling.