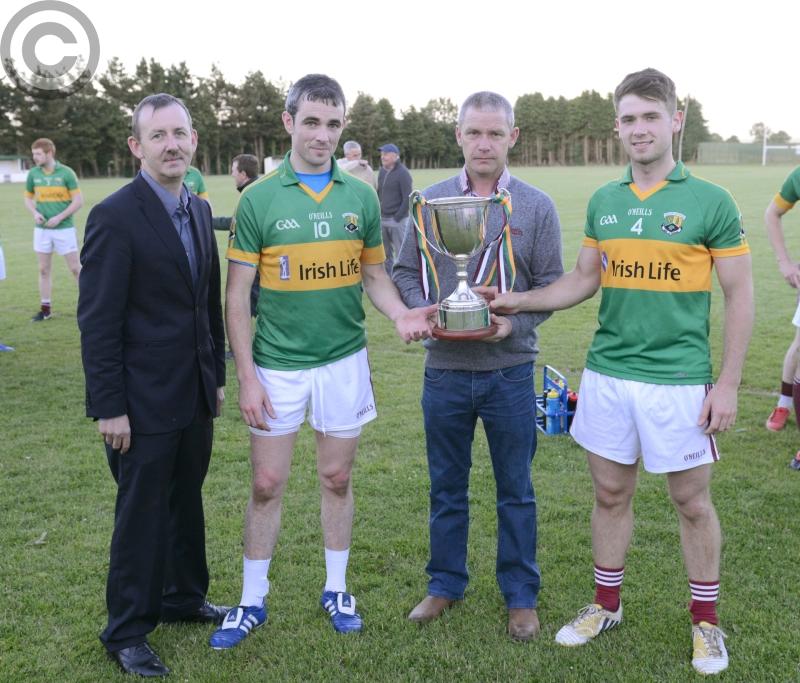 John Drake presenting the John Drake Cup to Gerard Farrell and Fergal Keenan, the joint captains of the Ardagh/Moydow team, with County Board Chairman Eamon Reilly also in the picture. Photo D Gilmore

Sean Pierson’s charges were full value for their win and played some lovely football throughout with Killian Farrell excellent in attack; the midfield duo of Paddy Keenan and Seamus Shortt were competent while their defence were resilient when called upon.

John Shea opened the scoring straight from the throw-in but minutes later Stephen Lynch (free) was on the mark for Connolly’s.

Paddy Ganley and Lynch (free) traded points before Ardagh/Moydow took a grip of the game. Killian Farrell kicked over two points (one free) and Gerard Farrell and Daryl Carrigy were also on target as they opened up a four point lead by the 15th minute.

While the gap was closed to just one point in the 16th minute when Paddy O’Neill flicked the ball to the net to get Connolly’s back into the game,  the Ardagh/Moydow response was terrific as they regained the upper hand.

Scores followed from Paddy Keenan (kicking a lovely point), Killian Farrell (free) and Paddy Ganley and Just before the break Daryl Carrigy finished off a lovely move which started in the defence  and ended with the U-21 county player rattling the net with a great strike. A free from Killian Farrell left Ardagh/Moydow in a commanding 1-10 to 1-2 advantage at the break.

The lead was extended to 10 points in the early stages of the second half with Killian Farrell once again accurate from a free and John Shea getting his second point of the game.

After going 26 minutes without a score, Connolly’s got a much needed point in the 42nd minute through Trevor Murtagh. Sean Kenny added another and then Ardagh/Moydow goalkeeper Darren Farrell done very well to tip a shot from Paddy O’Neill over the bar for a point.

Connolly’s brief comeback was halted when Killian Farrell kicked over a fine point.  Daryl Carrigy then landed two scores in a row and in the 51st minute there was 11 between the sides when John Shea set up Paddy Ganley for another point.

When Connolly’s tried to break and get scores they were denied by a solid Ardagh/Moydow defence and Stephen Lynch was on target from a free in the 53rd minute.

Substitute Patrick McDonnell got a  point for Connolly’s in the final minute of the game before Paddy Ganley kicked over a fine point for Ardagh/Moydow in the second minute of stoppage time.

Connolly’s tried in vain to get a consolation goal with Stephen Lynch converting a ’45 and right at the end Daryl Carrigy hit over a neat point for the stronger Ardagh/Moydow side who ran out emphatic winners of the Intermediate league title.