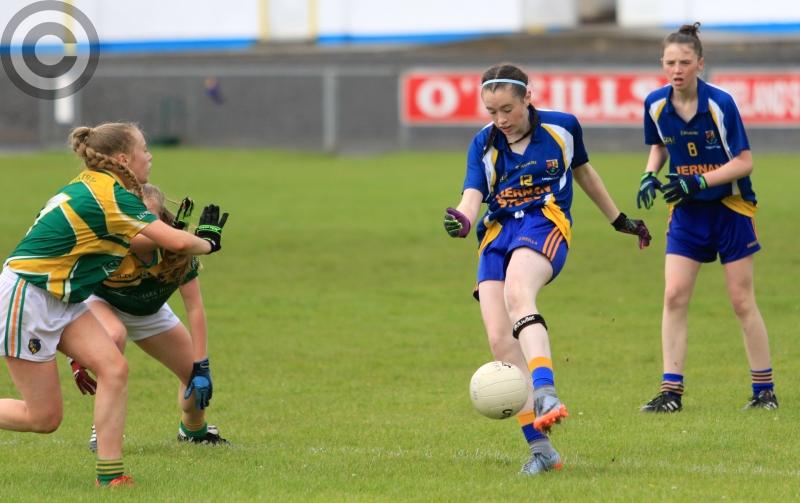 Melissa O'Kane in action for the Longford U-14 ladies against Leitrim with Grace Shannon also in the picture. Photo: Syl Healy

Leitrim went on a goals rush to shatter the Longford U-14 ladies All-Ireland hopes in the ‘B’ championship semi-final at the Mullahoran grounds on Sunday last.

Leitrim scored five of their goals in the first half and despite Longford battling back and levelling the game twice in the second half, Muireann Devaney got two more goals for Leitrim in the 49th and 50th minutes to settle this entertaining encounter. Longford were unable to recover from those blows as the Connacht county booked their place in the All-Ireland U-14 ‘B’  Final.

It was tough on Longford but the difference was that the sharp Leitrim forwards took their chances and when Longford tried to get back into the game in the second half the Leitrim defence were solid and made it difficult for Enda Duncan’s side.

The first time Longford were ahead in this game was the 2nd minute when Grace Shannon pointed a free. Muireann Devaney (free) levelled for Leitrim before they got their first goal in the 12th minute.

A nice point from Lauren McGuire was followed by Longford’s first goal from Katelyn McKeon to cut the gap to four but Leitrim hit back with a fourth goal in the 21st minute. It was game on when Longford scored two quick goals to cut the deficit to just one point in the 24th minute.

Down the other end Leitrim got a fifth goal two minutes later when Sarah Reynolds low shot came off the butt of the post and crossed the line. Longford ended the first half well with points from Molly Mulvihill, Kamille Burke (free) and Grace Shannon to trail by just the minimum of margins at the break; 5-1 to 3-6.

Leitrim started the second half brightly and kicked over two early points. In the 39th minute Longford were awarded a penalty after Lauren McGuire was taken down and Melissa O’Kane converted the kick for a goal to level the game.

Anna Hazlett edged Leitrim ahead again the 41st minute but Melissa O’Kane drew Longford level again in the 47th minute. That proved to be the end of Longford’s fightback as a combination of poor decision making and the concession of two goals in quick succession saw Leitrim establish a comfortable lead.

Mairéad Clancy was sinbinned for Leitrim in the 52nd minute as they were reduced to 14 players.

Kamille Burke then hit over a free for Longford but once again Leitrim responded with two points to consolidate their tight grip on the game. Teni Alaba was sinbinned for Longford in stoppage time before Lauren McGuire (free) got the final score as Longford fell to a five points defeat.