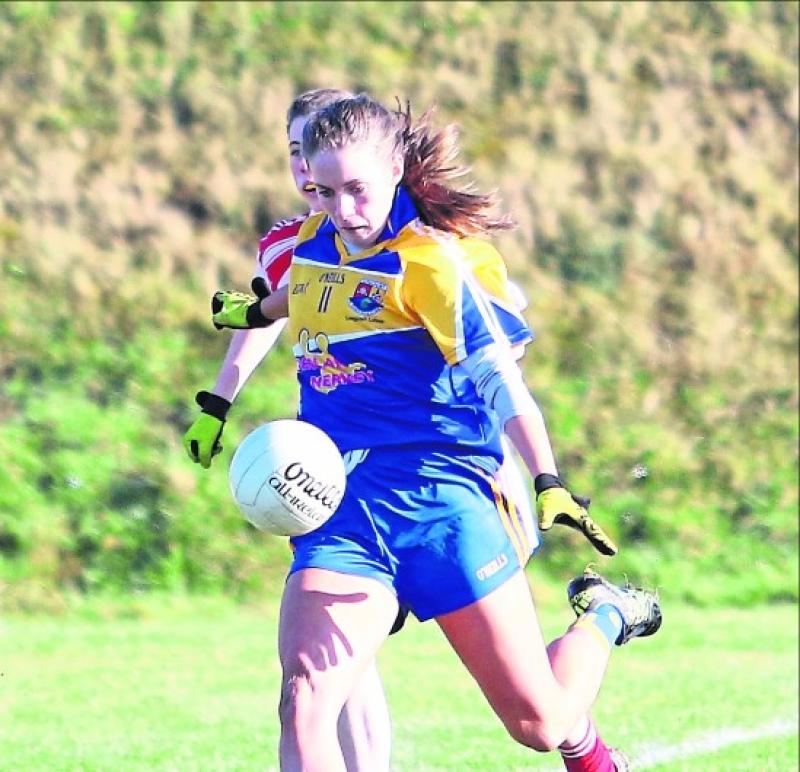 Michelle Farrell, winner of the player of the match award in Longford's victory over Wicklow in the National League Division 4 Final.

Longford Ladies won the Lidl National League Division 4 title and in doing so gained promotion back to Division 3 with a hard earned victory over Wicklow in the final played in difficult wet and windy conditions at the Clane grounds on Sunday.

James Daly’s side went through the league with ease but found the going tough in the title decider  against Wicklow. The Garden County were formidable opposition at the Co Kildare venue and made Longford work hard for this success.

Wicklow put it up to Longford right from the start and should have opened the scoring but instead it was Sarah Tierney who registered the game’s first point in the 2nd minute.

Aisling Reynolds followed up with two points before Wicklow finally got their first point in the 9th minute through Jackie Kinch.

Points were exchanged between Sarah Tierney and Amy Murphy before a neat move involving substitute Aoife Darcy and Michelle Farrell saw Tierney got her third point of the game.

Claire Walsh fired over a free for Wicklow in the 20th minute but Longford hit back with two points from Michelle Farrell (one free) and she had been unlucky to see her shot hit the crossbar earlier. The crossbar was to deny the Colmcille girl a further three times during the course of the game.

Amy Murphy hit over a point for Wicklow before Michelle Farrell was on target again as Longford went in at the break 0-8 to 0-4 in front.

Laura Hogan got the first score of the second half for Wicklow before Michelle Farrell hit over her fourth point, a free. Minutes later a good move saw substitute Aisling McCormack pass the ball to Sarah Tierney and the Mostrim girl made no mistake in getting Longford’s first goal in the 39th minute.

But Wicklow closed the cap to three in the 43rd minute when substitute Katie Miley got in to score a goal and that made it very interesting indeed.

On a couple of occasions there was just two points separating the sides in the closing stages of the game as Longford were punished for mistakes that were made.  With six minutes remaining Helena Dowling shot over the bar to leave Wicklow in with a chance  but that proved to be their final score.

Longford got a game clinching second goal in the 57th minute when Michelle Farrell burst through and while her initial shot hit the crossbar she followed up to finish the rebound to the net to make absolutely certain of the league title triumph.